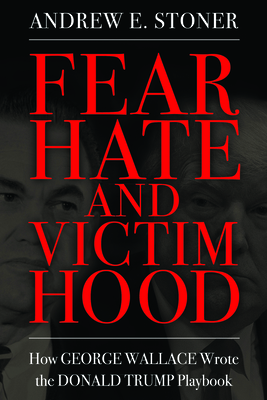 By Andrew E. Stoner
Email or call for price

When Donald Trump announced his campaign for president in 2015, journalists, historians, and politicians alike attempted to compare his candidacy to that of Governor George Wallace. Like Trump, Wallace, who launched four presidential campaigns between 1964 and 1976, utilized rhetoric based in resentment, nationalism, and anger to sway and eventually captivate voters among America's white majority. Though separated by almost half a century, the campaigns of both Wallace and Trump broke new grounds for political partisanship and divisiveness. In Fear, Hate, and Victimhood: How George Wallace Wrote the Donald Trump Playbook, author Andrew E. Stoner conducts a deep analysis of the two candidates, their campaigns, and their speeches and activities, as well as their coverage by the media, through the lens of demagogic rhetoric. Though past work on Wallace argues conventional politics overcame the candidate, Stoner makes the case that Wallace may in fact be a prelude to the more successful Trump campaign. Stoner considers how ideas about "in-group" and "out-group" mentalities operate in politics, how anti-establishment views permeate much of the rhetoric in question, and how expressions of victimhood often paradoxically characterize the language of a leader praised for "telling it like it is." He also examines the role of political spectacle in each candidate's campaigns, exploring how media struggles to respond to--let alone document--demagogic rhetoric. Ultimately, the author suggests that the Trump presidency can be understood as an actualized version of the Wallace presidency that never was. Though vast differences exist, the demagogic positioning of both men provides a framework to dissect these times--and perhaps a valuable warning about what is possible in our highly digitized information society.

Andrew E. Stoner was associate professor of communication studies at California State University, Sacramento. He is author of Campaign Crossroads: Presidential Politics in Indiana from Lincoln to Obama and The Journalist of Castro Street: The Life of Randy Shilts.