Faith and Foreign Affairs in the American Century (Paperback) 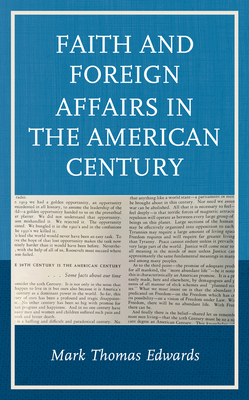 The United States has led the world in almost every way since World War I. In 1941, Life magazine publisher Henry Luce dubbed his country's preponderant power "the American Century." His editorial was a statement of fact but also an aspiration for countrymen to unite in promotion of a world order friendly to American interests. Faith and Foreign Affairs in the American Century examines the nature of public involvement in American diplomacy. As a concept decades in the making, the American Century was conceived by those connected through the country's leading foreign policy think tank, the Council on Foreign Relations. The missionary couple and Washington insiders Francis and Helen Miller, who fought to make the American empire a radically democratic one, figured prominently in that work. The Millers' many partnerships embodied the conflicts as well as the cooperation of Christianity and secularism in the long reimagining of the United States as a global state. Mark Thomas Edwards offers in this study a genealogy of the concept of the American Century. Readers will encounter moments of Protestant Christian power and marginalization in the making of modern American foreign relations.

Mark Thomas Edwards is associate professor of US history and politics at Spring Arbor University.