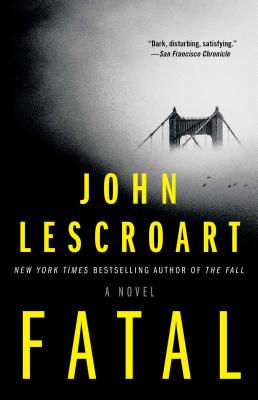 John Lescroart’s latest spectacular New York Times bestseller explores the unexpected and shattering consequences of a one-night stand on a seemingly happily married couple—a “dark, disturbing, satisfying read” (San Francisco Chronicle) that asks us to consider how much we really know about the lives of our closest friends.

Fatal is John Lescroart’s most highly acclaimed and biggest selling book in recent years. As the Huffington Post raves, “Lescroart is a master storyteller as he knows how to craft a plot and how to create fully developed characters. In both of these departments, this book comes across as one of his best works.”

When Kate Jameson confesses to her oldest friend, Beth Tully, that she’s obsessing about a married man she just met, Beth is alarmed. As a San Francisco police detective, Beth has seen time and again the destructive repercussions of infidelity. But Kate, despite her happy marriage and two wonderful children, can’t get Peter Ash out of her head and initiates one intense sexual encounter. Confident that her life can now return to normal, Kate never considers that Peter may not be so willing to move on.

Six months later, Peter Ash’s body washes up on a beach, and Beth is assigned the case. As the pool of suspects narrows and the mystery of who Peter Ash became during the final months of his life deepens, Beth is forced to see that the prime suspect might have been right in front of her the entire time.

Fatal is fresh proof that John Lescroart is “a true master of the craft” (Associated Press) whose picture should be “printed beside the definition of ‘spellbinding’ in the dictionary” (Suspense Magazine).

John Lescroart is the New York Times bestselling author of twenty-nine previous novels, including the The Rule of Law, Poison, and Fatal. His books have sold more than ten million copies and have been translated into twenty-two languages. He lives in Northern California.

"Somehow Lescroart weaves this moral ambiguity into a tale that is both frustrating and gratifying. His writing is constantly surprising, and the ending is perfect. Fans will not miss his regular series characters, while those who have never read his novels will discover a true master of the craft."
— Associated Press

"Lescroart has always found a fine balance between his two favorite genres: police procedural and legal drama. Fatal succeeds with a new pairing: It is a psychological thriller in bed with a homicide investigation...The characters of Fatal may be lawyers, but their inner lives matter here, not their courtroom dramas...Lescroart wants to pick a side in this battle, but he’s too good a writer to moralize. The result is a dark, disturbing, satisfying read."
— San Francisco Chronicle

“On its own, this is a terrific stand-alone thriller that melds police procedural with plenty of suspense and action, and it should appeal to Harlan Coben or Gillian Flynn fans.”
— Booklist (starred review)

“Absorbing… The challenges for the protagonists lend verisimilitude to the story and give it a satisfying rhythm. Lescroart keeps readers guessing until the very end.”
— Publishers Weekly

"After dishing out 20-plus cases to San Francisco attorney Dismas Hardy and his friends and relations (The Fall, 2015, etc.), Lescroart pens a stand-alone whose Bay Area is just as tense and treacherous even if you’re not part of the justice system...Lescroart manages the first movement of this cautionary tale by mixing his pitches with exquisite control...he still has a few nifty surprises in store for fans who’d expect nothing less."
— Kirkus Reviews

“Edgy and character-driven (his trademark), with an ending that will surprise his fans.”
— Sacramento Bee

"Lescroart is a master storyteller as he knows how to craft a plot and how to create fully developed characters. In both of these departments this book comes across as one of his best works."

“After reading this one, you’ll wonder why author Lescroart’s picture is not printed beside the definition of ‘spellbinding’ in the dictionary. Fatal is all about surprises and the dangerous cost of a one-night-stand on a happily married couple.”
— Suspense Magazine

"Whether you are a steadfast fan of Lescroart’s or have never read his work, you simply must read Fatal."
— Bookreporter

“Rendered every bit as well as you’d expect from such an experienced storyteller, this is a book you will want to finish in one sitting.”
— BookPage