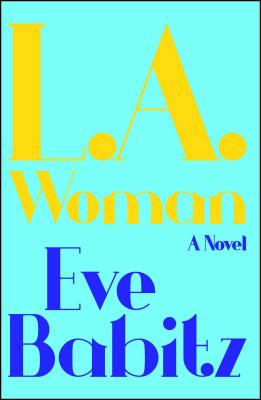 Soon to be a TV show on Hulu

Eve Babitz is a writer like no other—she “is to prose what Chet Baker is to jazz” (Vanity Fair)—and she has influenced a generation of writers and readers with her sophisticated, witty, and delightful work. L.A. Woman is quintessential Babitz, the story of Sophie, a twenty-something blonde Jim Morrison groupie gliding through a golden existence in L.A. and Lola, a German immigrant who settles in Hollywood in the twenties to drive Pierce Arrows recklessly down Sunset Boulevard and who knows that Maybelline mascara cakes and Rudolph Valentino are the essence of life.

Sophie and Lola, like the many other women who move in and out of this electric saga know that while L.A. is constantly changing it is essentially eternal; through their eyes we see the mixture of high culture and low, the promises of youth and the fulfillment of nostalgia, the pink sunsets and the palm trees that are L.A. And through this fantastic tale, Babitz shares what it is to be a woman in what she convinces us is the capital of civilization.

Eve Babitz was born and grew up in Hollywood. She began to write in 1972 after designing album covers for such artists as Linda Ronstadt, Buffalo Springfield, The Byrds, and Lord Buckley. Her articles and short stories have appeared in Vogue, Rolling Stone, Esquire, and The New York Times Book Review. Her books include Eve’s Hollywood, Slow Days, Fast Company, Two by Two, and Sex and Rage. She died in 2021.

"What truly sets Babitz apart from L.A. writers like Didion or Nathanael West... is that no matter what cruel realities she might face, a part of her still buys the Hollywood fantasy, feels its magnetic pull as much as that Midwestern hopeful who heads to the coast in pursuit of 'movie dreams.'"
— Los Angeles Review of Books

“Eve Babitz is to prose what Chet Baker, with his light, airy style, lyrical but also rhythmic, detached but also sensuous, is to jazz.”
— Vanity Fair