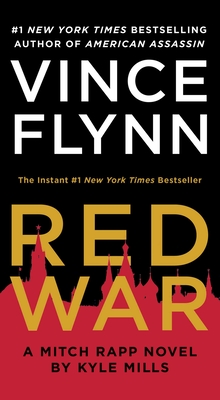 By Vince Flynn, Kyle Mills
$9.99
Possibly out of print. Email or call to check availability and price.

This is book number 17 in the A Mitch Rapp Novel series.

When Russian president Maxim Krupin discovers that he has inoperable brain cancer, he’s determined to cling to power. His first task is to kill or imprison any of his countrymen who can threaten him. Soon, though, his illness becomes serious enough to require a more dramatic diversion—war with the West.

Upon learning of Krupin’s condition, CIA director Irene Kennedy understands that the US is facing an opponent who has nothing to lose. The only way to avoid a confrontation that could leave millions dead is to send Mitch Rapp to Russia under impossibly dangerous orders. With the Kremlin’s entire security apparatus hunting him, he must find and kill a man many have deemed the most powerful in the world.

Success means averting a war that could consume all of Europe. But if his mission is discovered, Rapp will plunge Russia and America into a conflict that neither will survive in “a timely, explosive novel that shows yet again why Mitch Rapp is the best hero the thriller genre has to offer” (The Real Book Spy).

Kyle Mills is the #1 New York Times bestselling author of twenty-one political thrillers, including Total Power, Lethal Agent, and Red War for Vince Flynn and The Patriot Attack for Robert Ludlum. He initially found inspiration from his father, the former director of Interpol, and still draws on his contacts in the intelligence community to give his books such realism. Avid outdoor athletes, he and his wife split their time between Jackson Hole, Wyoming, and Granada, Spain. Visit his website at KyleMills.com or connect with him on Twitter, Facebook, and Instagram @KyleMillsAuthor.

"Outstanding . . . Mills is writing at the top of his game in this nail-biter."
— Publishers Weekly (starred review)

"Kyle Mills continues his impressive run of must-read thrillers with RED WAR, a timely, explosive novel that shows yet again why Mitch Rapp is the best hero the thriller genre has to offer. . . and why Mills is the only writer capable of filling the enormous void left by Vince Flynn."
— The Real Book Spy

"All action from start to finish . . . a page-turner all the way up to the climatic finale that you just can’t put down."
— Red Carpet Crash

"In the world of black-ops thrillers, Mitch Rapp remains the gold standard. Mills has embraced the high-concept-thriller style and continues to exceed expectations."
— Booklist (starred review)

"The characters drive the story and Mitch Rapp continues to be a mainstay of the modern techno-thriller."
— New York Journal of Books