The Whale Warriors: The Battle at the Bottom of the World to Save the Planet's Largest Mammals (Paperback) 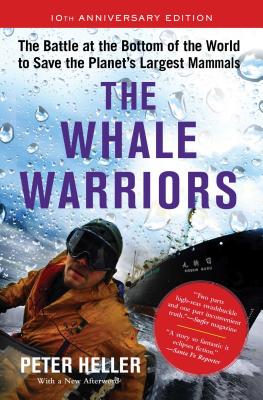 Now with a new afterword by the author, the tenth-anniversary edition of Peter Heller’s “swashbuckling adventure” (Publishers Weekly) takes us on a hair-raising journey aboard a whale saving pirate ship with a vigilante crew whose mission is to stop illegal Japanese whaling in the stormy seas of Antarctica.

The Whale Warriors is an adventure story set in the far reaches of the globe. For two months in 2005, journalist Peter Heller was aboard the Farley Mowat as it stalked its prey—a Japanese whaling fleet—through the storms and ice of Antarctica. The little ship is black, flies under a jolly roger, and carries members of the Sea Shepherd Society, a radical environmental group who are willing to die to stop illegal whale hunting.

Heller recreates a nail-biting showdown when Captain Watson and his crew attempt to deliberately ram an enormous Japanese whaling ship, trying to tear open its hull with a steel blade called a “Can Opener.” In thirty-five-foot seas, a deadly game of Antarctic chicken begins. But while the ships are far from rescue, the world is watching. Japan threatens to send down defense aircraft and warships, Australia appeals for calm, New Zealand dispatches military surveillance aircraft, the US Office of Naval Intelligence issues a piracy warning, and international media begin to track the developing whale war.

As Heller describes the slow, rusting, old Norwegian trawler Farley Mowat and the fast, new six ship whaling fleet of the Japanese, we also learn about the crisis of our oceans, which are on the verge of total ecosystem collapse. The exploitation of endangered whales is emblematic of an over-exploitation of the seas that is now entering its desperate denouement with our own survival in the balance. “A swift kick to any remaining complacency about the plight of our oceans” (National Geographic Adventure), The Whale Warriors is “two parts high seas swashbuckle and one part inconvenient truth” (Surfer).

Peter Heller is an award-winning adventure writer and long-time contributor to NPR. He is a contributing editor at Outside magazine and National Geographic Adventure and the author of Hell or High Water: Surviving Tibet's Tsangpo River. He lives in Denver, Colorado. He can be reached at PeterHeller.net.