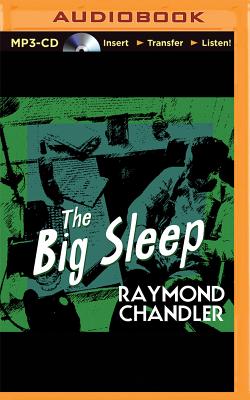 By Raymond Chandler, Ray Porter (Read by)
$14.99
Possibly out of print. Email or call to check availability and price.

Los Angeles PI Philip Marlowe is working for the Sternwood family. Old man Sternwood, crippled and wheelchair-bound, is being given the squeeze by a blackmailer and he wants Marlowe to make the problem go away. But with Sternwood's two wild, devil-may-care daughters prowling LA's seedy backstreets, Marlowe's got his work cut out - and that's before he stumbles over the first corpse.

Raymond Chandler was born in Chicago in 1888 and moved to England with his family when he was 12. He attended Dulwich College, Alma Mater to some of the 20th century's most renowned writers. Returning to America in 1912, he settled in California, worked in a number of jobs, and later married.

It was during the Depression era that he seriously turned his hand to writing and his first published story appeared in the pulp magazine Black Mask in 1933, followed six years later by his first novel. The Big Sleep introduced the world to Philip Marlowe, the often imitated but never-bettered hard-boiled private investigator. It is in Marlowe's long shadow that every fictional detective must stand - and under the influence of Raymond Chandler's addictive prose that every crime author must write.