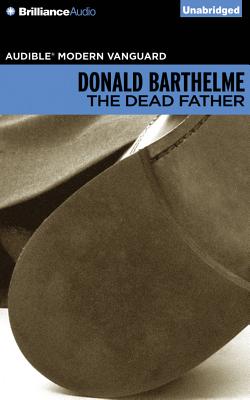 By Donald Barthelme, Dennis Holland (Read by)
$11.99
Possibly out of print. Email or call to check availability and price.

"There is nothing unusual about the foot, except that it is seven meters high." Nineteen people are dragging, by means of a cable, an immense carcass through the countryside. The carcass is that of the Dead Father, a half-dead, half-alive, part-mechanical, wise, vain, powerful being who still has hopes for himself, although he is, effectively, dead. Thomas, Julie, Edmund, Emma, and the others variously insult, placate, cater to, and defend the Dead Father as the procession moves through the country of the Wends, the territory of the Great Father Serpent, and a variety of encounters and explorations toward its mysterious goal.

In the austere, extraordinary prose that strongly influenced a generation of fiction writers, Donald Barthelme offered in The Dead Father a glimpse into his unique fictional universe: a many-shaded landscape of first and last things, striking, comic, manic, inevitable.