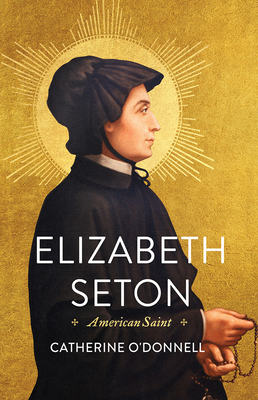 In 1975, two centuries after her birth, Pope Paul VI canonized Elizabeth Ann Seton, making her the first saint to be a native-born citizen of the United States in the Roman Catholic Church. Seton came of age in Manhattan as the city and her family struggled to rebuild themselves after the Revolution, explored both contemporary philosophy and Christianity, converted to Catholicism from her native Episcopalian faith, and built the St. Joseph's Academy and Free School in Emmitsburg, Maryland. Hers was an exemplary early American life of struggle, ambition, questioning, and faith, and in this flowing biography, Catherine O'Donnell has given Seton her due.

O'Donnell places Seton squarely in the context of the dynamic and risky years of the American and French Revolutions and their aftermath. Just as Seton's dramatic life was studded with hardship, achievement, and grief so were the social, economic, political, and religious scenes of the Early American Republic in which she lived. O'Donnell provides the reader with a strong sense of this remarkable woman's intelligence and compassion as she withstood her husband's financial failures and untimely death, undertook a slow conversion to Catholicism, and struggled to reconcile her single-minded faith with her respect for others' different choices. The fruit of her labors were the creation of a spirituality that embraced human connections as well as divine love and the American Sisters of Charity, part of an enduring global community with a specific apostolate for teaching.

The trove of correspondence, journals, reflections, and community records that O'Donnell weaves together throughout Elizabeth Seton provides deep insight into her life and her world. Each source enriches our understanding of women's friendships and choices, illuminates the relationships within the often-opaque world of early religious communities, and upends conventional wisdom about the ways Americans of different faiths competed and collaborated during the nation's earliest years. Through her close and sympathetic reading of Seton's letters and journals, O'Donnell reveals Seton the person and shows us how, with both pride and humility, she came to understand her own importance as Mother Seton in the years before her death in 1821.

Catherine O'Donnell is Associate Professor of History at Arizona State University and she writes about religion, culture, and politics in early America and the Atlantic World. She is the author of Men of Letters in the Early Republic.