The Science of Serial Killers: The Truth Behind Ted Bundy, Lizzie Borden, Jack the Ripper, and Other Notorious Murderers of Cinematic Legend (Paperback) 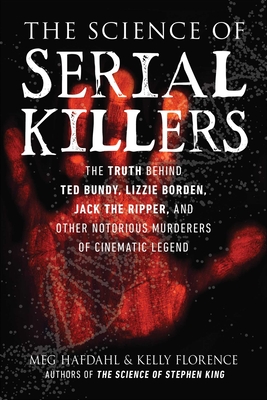 Gothic media moguls Kelly Florence and Meg Hafdahl, authors of The Science of Monsters, The Science of Women in Horror, and The Science of Stephen King, and co-hosts of the Horror Rewind podcast called “the best horror film podcast out there” by Film Daddy, present a guide to the serial killers who inspired the movies and media we all know and love. Delve into the brutal truth behind horror’s secret: many monsters portrayed on the silver screen are based on true murderers. Uncover the truth behind the real monsters of horror, answering such questions as:  Through interviews, film analysis, and bone-chilling discoveries, join Kelly and Meg as they learn about the horrors of true crime through the decades.

Meg Hafdahl is a writer and co-host of the Horror Rewind podcast. Her female-driven horror fiction has been produced for audio by The Wicked Library. She is the author of Her Dark Inheritance, Daughters of Darkness, and the short story series Twisted Reveries. Meg lives in Minnesota with her husband, two young sons, and a menagerie of pets.

Kelly Florence is a teacher, a mother, and a horror film lover. She is passionate about female representation in all media and particularly in the horror genre. Kelly teaches at Lake Superior College in Duluth, Minnesota, and produces and co-hosts Horror Rewind.

“Hafdahl and Florence have written a page-turner probing into the most notorious killers and their influence on film and TV. They wisely dive into a variety of fascinating angles with Hollywood’s fascination, and the psychology and science behind what made them tick. By the end, you’ll have plenty of movies to add to your streaming queue.”
—Paul McGuire Grimes, film critic and entertainment reporter

“Hafdahl and Florence have done it again. The Science of Serial Killers is an engaging, informative dive into the forensic, environmental, and legal peripherals of notorious crimes that have inspired the horror genre’s most celebrated films.”
—Anya Stanley, writer and film critic for Fangoria magazine and AVClub.com

"Hafdahl and Florence once again deliver a compulsive read, this time to explore the fascinating cross-section of horror movies and the true crimes that inspired them. Through easily digestible forensic science, interviews, keen insight, and unwavering empathy for victims and survivors, the authors offer a deft examination of the steadfast fascination with the world’s most infamous killers."
—Meagan Navarro, film critic and horror journalist

"Close attention to how events are translated, represented, or interpreted makes this an outstanding addition to science and cinema studies collections."
—Diane Donovan, author of San Francisco Relocated