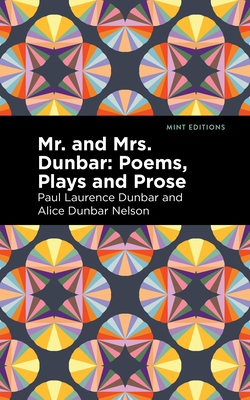 Mr. and Mrs. Dunbar: Poems, Plays and Prose (2021) is a selection of the literary works of Paul Laurence Dunbar and Alice Dunbar Nelson. With such collections Oak and Ivy (1892) and Majors and Minors (1896), Paul Laurence Dunbar earned a reputation as an artist with a powerful vision of faith and perseverance who sought to capture and examine the diversity of the African American experience. In her poems, plays, and stories, Alice Dunbar Nelson explores themes of class, prejudice, faith, and romance while paying particular attention to the phenomenon of racial passing. Mr. and Mrs. Dunbar: Poems, Plays and Prose includes dozen of their individual literary works in a compact, carefully curated volume. Throughout his oeuvre, Dunbar explores the role of the poet in society, grounding each poem within his identity as a Black man in America. In "Frederick Douglass," an elegy written for the occasion of the great man's passing, Dunbar makes clear the consequences of pride and defiance in a nation built by slaves: "He dared the lightning in the lightning's track, / And answered thunder with his thunder back." In "The Place Where the Rainbow Ends," Dunbar, perhaps reflecting on his proximity to death, provides a simple song with a cautionary, utopian vision of hope and happiness: "Oh, many have sought it, / And all would have bought it, / With the blood we so recklessly spend; / But none has uncovered, / The gold, nor discovered / The spot at the rainbow's end." Meditative and bittersweet, Dunbar rejects wealth and power as a means of achieving fulfillment, looking instead to establish an inner peace for himself that he might "find without motion, / The place where the rainbow ends," a place " w]here care shall be quiet, / And love shall run riot, / And he] shall find wealth in his] friends." Whether a vision of heaven or of the possibility of peace on earth, this poem finds echoes across Dunbar's penultimate volume. Nearing death at such a young age, he prepares himself to lose the life he had fought so hard to achieve, a life devoted to reaching the hearts and minds of others. Mine Eyes Have Seen (1918) is a one-act play by Alice Dunbar Nelson. Published in The Crisis, the influential journal of the NAACP, Mine Eyes Have Seen is a brutal portrait of race and identity in twentieth century America. Exploring themes of violence, faith, patriotism, and economic struggle, Dunbar Nelson crafts a poignant and unforgettable work of fiction. In the short story "The Goodness of St. Rocque," Manuela is a popular young woman of status in New Orleans' thriving Creole community. Like many women her age, she hopes to marry a handsome and successful man. Setting her sights on Theophile, she prepares to be courted in the traditional manner of her people. When rumor gets out that he has been spending time with Claralie, a beautiful blonde, Manuela is forced to seek supernatural assistance. With a beautifully designed cover and professionally typeset manuscript, this edition of Mr. and Mrs. Dunbar: Poems, Plays and Prose is a classic of African American literature reimagined for modern readers.