Happiness by Design: Modernism and Media in the Eames Era (Paperback) 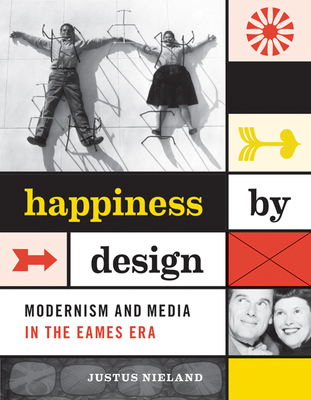 By Justus Nieland
$39.95
Possibly out of print. Email or call to check availability and price.

For the designers Charles and Ray Eames, happiness was both a technical and ideological problem central to the future of liberal democracy. Being happy demanded new things but also a vanguard life in media that the Eameses modeled as they brought film into their design practice. Midcentury modernism is often considered institutionalized, but Happiness by Design casts Eames-era designers as innovative media artists, technophilic humanists, change managers, and neglected film theorists.

Happiness by Design offers a fresh cultural history of midcentury modernism through the film and multimedia experiments of Charles and Ray Eames and their peers—Will Burtin, László Moholy-Nagy, and György Kepes, among others—at a moment when designers enjoyed a new cultural prestige. Justus Nieland traces how, as representatives of the American Century’s exuberant material culture, Cold War designers engaged in creative activities that spanned disciplines and blended art and technoscience while reckoning with the environmental reach of media at the dawn of the information age.

Eames-era modernism, Nieland shows, fueled novel techniques of culture administration, spawning new partnerships between cultural and educational institutions, corporations, and the state. From the studio, showroom floor, or classroom to the stages of world fairs and international conferences, the midcentury multimedia experiments of Charles and Ray Eames and their circle became key to a liberal democratic lifestyle—and also anticipated the look and feel of our networked present.

Justus Nieland is professor of English at Michigan State University. He is author of David Lynch and Feeling Modern: The Eccentricities of Public Life; coauthor of Film Noir: Hard-Boiled Modernity and the Cultures of Globalization; and coeditor of the Contemporary Film Directors book series.

"Happiness by Design is a fascinating contribution to the fate of modernisms at midcentury. Justus Nieland unpacks the cheery products of Eames-era modern design as they manifest in material objects, in experimental films and multi-screen media, and in new forms of knowledge-making at conferences and lectures. He weaves all of this together in a rich and often surprising intellectual history of the midcentury ‘good life’ that questions how designers’ attempts to fashion human happiness quickly devolved into sad stories and risky futures."—Lynn Spigel, author of TV by Design: Modern Art and the Rise of Network Television

"Happiness by Design is an astonishingly rich and inventive book. It immerses us in a world of midcentury modernism that feels connected to our present but is shaped by ideas and hopes we have perhaps forgotten. Justus Nieland has written a fantastic cultural history of the artists, filmmakers, and intellectuals who not only created some of the most iconic works of the period, but also whole environments filled with media and technologies actually designed to make life better."—Mark Goble, author of Beautiful Circuits: Modernism and the Mediated Life

"Who doesn’t want to be happy? Justus Nieland’s brilliant book exposes the political and aesthetic stakes of this seemingly innocent desire voiced by so many of us in the present. Breaking new ground in film studies, Happiness by Design builds an account of how happiness became a technology, medium, and measure of human well-being and security. Happiness, in this book, is not just an emotion—it is a technique that has become central to how we imagine not only who we are but how we will survive in a rapidly changing world."—Orit Halpern, author of Beautiful Data: A History of Vision and Reason since 1945

"The book’s design reinforces its subjects’ focus on knowledge organization and delivery."—ARLIS/NA Reviews

"A dazzling array of theorizing on the plight of the world and the roles of designers and theoreticians in it."—CHOICE

"Happiness by Design is an astonishingly rich portrait of an era whose reinvention of happiness out of global disaster might help chart out our own life among the ruins."—American Literary History

"Lusciously illustrated . . . this book invites historians of design to consider the interdisciplinary practices and media techniques that shaped twentieth-century modernist design in the US and offers an invaluable resource for media scholars interested in the ways that design culture shaped period media practices. A wonderful read."—Design and Culture

"Adventurous readers as well as film enthusiasts wishing to understand the medium in a much-wider context will find a veritable treasure trove of information."—Film International