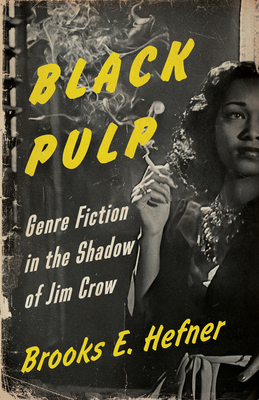 By Brooks E. Hefner
Email or call for price

In recent years, Jordan Peele’s Get Out, Marvel’s Black Panther, and HBO’s Watchmen have been lauded for the innovative ways they repurpose genre conventions to criticize white supremacy, celebrate Black resistance, and imagine a more racially just world—important progressive messages widely spread precisely because they are packaged in popular genres. But it turns out, such generic retooling for antiracist purposes is nothing new.

As Brooks E. Hefner’s Black Pulp shows, this tradition of antiracist genre revision begins even earlier than recent studies of Black superhero comics of the 1960s have revealed. Hefner traces it back to a phenomenon that began in the 1920s, to serialized (and sometimes syndicated) genre stories written by Black authors in Black newspapers with large circulations among middle- and working-class Black readers. From the pages of the Pittsburgh Courier and the Baltimore Afro-American, Hefner recovers a rich archive of African American genre fiction from the 1920s through the mid-1950s—spanning everything from romance, hero-adventure, and crime stories to westerns and science fiction. Reading these stories, Hefner explores how their authors deployed, critiqued, and reassembled genre formulas—and the pleasures they offer to readers—in the service of racial justice: to criticize Jim Crow segregation, racial capitalism, and the sexual exploitation of Black women; to imagine successful interracial romance and collective sociopolitical progress; and to cheer Black agency, even retributive violence in the face of white supremacy.

Brooks E. Hefner is professor of English at James Madison University. He is author of The Word on the Streets: The American Language of Vernacular Modernism and codirector of the NEH-funded digital humanities project Circulating American Magazines.

"Brooks Hefner’s compelling and insightful book asks us to reconsider not only what counts as Black imaginative writing but what it means to read Black literature at all. Attending to a vast yet overlooked archive of serial genre fiction, Hefner highlights the pleasures afforded by African Americans’ engagement with popular formulas in the Black press. The result is an eye-opening account of modern literary production that centers the tastes and experiences of Black readers themselves. Beyond the predominance of the protest novel in the white imagination, Hefner reveals the narrative forms and medial formats out of which Black America’s imagined communities were built."—Kinohi Nishikawa, author of Street Players: Black Pulp Fiction and the Making of a Literary Underground

"Black Pulp tells a much needed and long overdue literary history of the short fiction and serial narratives featured in the African American periodical press of the mid-twentieth century. As Brooks E. Hefner’s deft and compelling close readings and contextual accounts of the pulp fiction industry’s developments demonstrate, Black popular fiction’s fresh formulas offered Black readers utopian (not nihilist) visions of the justice they deserved—but were denied—in Jim Crow America. Thoroughly researched, shrewdly argued, wonderfully illustrated, and bracingly written, Black Pulp is as thrilling to read as the literature it surveys. This is a work that anyone interested in mid-century African American and American popular literature, genre criticism, and US periodical history must read."—Jacqueline Goldsby, Yale University

"A fascinating glimpse into a part of Black history that isn’t well known."—Real Change News