The Gift of the Magi (Paperback) 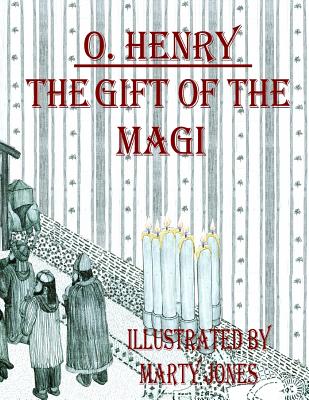 "The Gift of the Magi" an illustrated short story, originally written by O. Henry. It tells about a young married couple named Jim and Della and how they deal with the challenge of buying secret Christmas gifts for each when they have more love than money.

I don't remember a time that I didn't draw; I began drawing "seriously" in High School and intended to become a Technical Illustrator. Lack of planning and foresight led me to a degree in Architecture, instead of an education in Art. Further distractions, such as "lack of work" led me to an eight-year career in construction; further distractions, such as "lack of work" led me to a career with the City of Portland as a Building Plans Examiner, from which I 'retired' with a medical layoff in 1998. But the dream never died... I've been a free-lance commercial artist and designer for over 30 years. During my college years I exhibited my artwork in a number of non-juried shows, but found little time for "serious" illustration until 1988, when a ruptured appendix and a brush with death caused me to re-evaluate my goals and priorities. I realized that my future wasn't as predictable as it appeared; and that God has given me a talent He intended to be used for the benefit of others. I then decided it was time to get "serious" about my career as an illustrator. My 'body of work' is fairly eclectic in its nature, and isn't specifically geared toward one type of illustration; however, all of my illustrations are realistically-styled. My preferred media is digitally-colored graphite. As of this writing, I've illustrated seven children's books, created numerous illustrations for a variety of clients; including Steiner Korea, Scholastic Inc. and the Yellowstone Park Foundation. Over the years I have created a large number of wildlife drawings and a numerous portraits. I also create Architectural and Technical illustrations. In 2015 I added digital publishing to my business; publishing four titles this year.