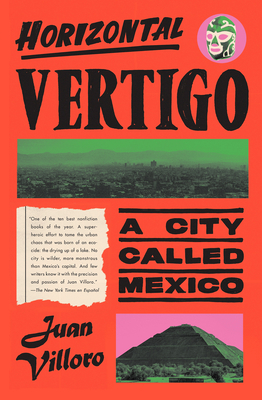 UFOs, the subway, pandemics, the church, men who will sell you a parking space and charge you for them to watch your car … all of these things can be found in the labyrinth of a city that Juan Villoro constructs in Horizontal Vertigo. Great gift for your travel bud, urban planner, or CDMX ex-pat.

At once intimate and wide-ranging, and as enthralling, surprising, and vivid as the place itself, this is a uniquely eye-opening tour of one of the great metropolises of the world, and its largest Spanish-speaking city.

Horizontal Vertigo: The title refers to the fear of ever-impending earthquakes that led Mexicans to build their capital city outward rather than upward. With the perspicacity of a keenly observant flaneur, Juan Villoro wanders through Mexico City seemingly without a plan, describing people, places, and things while brilliantly drawing connections among them. In so doing he reveals, in all its multitudinous glory, the vicissitudes and triumphs of the city ’s cultural, political, and social history: from indigenous antiquity to the Aztec period, from the Spanish conquest to Mexico City today—one of the world’s leading cultural and financial centers.

In this deeply iconoclastic book, Villoro organizes his text around a recurring series of topics: “Living in the City,” “City Characters,” “Shocks,” “Crossings,” and “Ceremonies.” What he achieves, miraculously, is a stunning, intriguingly coherent meditation on Mexico City’s genius loci, its spirit of place.

JUAN VILLORO is Mexico’s preeminent novelist. Born in Mexico City in 1956, he is the author of half a dozen prize-winning novels and is also a journalist. In 2004, he received the Herralde Prizefor his novel El testigo (The Witness).

“Villoro recounts his adventures with a mix of irony and empathy, with a sense of humor and a feeling for the absurd. He is exquisitely attuned to the capital’s contradictions and nuances, and he knows how to listen to its inhabitants. There are deeply moving moments in this book.”
—The New York Times Book Review

"One of Mexico’s most celebrated contemporary writers offers an affectionate exploration of the country’s capital city. [Villoro] does not shy away from issues of poverty, class, and gender, and the result is an enthralling, often funny depiction of a city that ‘overflowed urbanism and installed itself in mythology.’”
—The New Yorker

"Horizontal Vertigo is the best—wittiest, wisest, most detailed and enlightened—book I've read about Mexico City. It is both deeply personal and scholarly, and most of all humane and humorous - Juan Villoro's triumph as a chronicler of Mexican life."
—Paul Theroux, author of On the Plain of Snakes: A Mexican Journey

"The joy of Horizontal Vertigo is that it offers a unique entry into Mexico City’s ‘inexhaustible encyclopedia’ of people, places and old traditions, complementing the history books and outperforming the tour guides... Villoro is so closely identified with Mexico City that it’s impossible to imagine how one can be known without the other, which is why his writings consistently employ the communal ‘we,’ as in this telling statement about the unbreakable bond between Chilangopolis and chilangos: ‘What was once a cityscape is now our autobiography.’”
—The Los Angeles Times

"Juan Villoro, one of Mexico’s leading novelists, delivers a contemporary portrait of Mexico City that is as diverse and labyrinthine as the city itself. In Horizontal Vertigo: A City Called Mexico, he weaves together voices, styles and disciplines in a personal and expansive exploration, a flâneur through geography, history and culture."
—The Guardian

“Deeply learned . . . Along his leisurely, illuminating path, Villoro delivers an essential update of Octavio Paz’s The Labyrinth of Solitude (1950). He can be both brittle and funny . . . Celebrating food, wandering through earthquake-struck ruins, reflecting on literary heroes, Villoro makes an excellent Virgil. An unparalleled portrait of a city in danger of growing past all reasonable limits.″
—Kirkus Reviews [starred review]

“This is a stimulating portrait of one of the world’s most mind-bending metropolises.″
—Publishers Weekly

“Villoro applies his witty and incisive pen to the monster that is Mexico City . . . Villoro’s voice is engaging, and the subject matter, fascinating . . . An unusual and rewarding read for all who love or are intrigued by Mexico City.″
—Booklist

“This is Villoro’s masterpiece . . . His great achievement in Horizontal Vertigo resides in his ability to understand and make the city known through different characters, occupations, and beliefs. Although many writers have been interested in Mexico City, such as Carlos Monsiváis and Carlos Fuentes, Juan Villoro finds a new, postmodern way of portraying the contemporary city.”
—World Literature Today

“One of the ten best nonfiction books of the year. A superheroic effort to tame the urban chaos that was born of an ecocide: the drying up of a lake. No city is wilder, more monstrous than Mexico’s capital. And few writers know it with more precision and passion than Juan Villoro.”
—The New York Times en Español