The Art of More: How Mathematics Created Civilization (Hardcover) 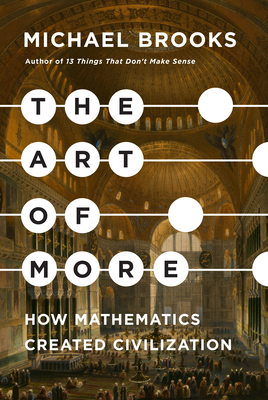 An illuminating, millennia-spanning history of the impact mathematics has had on the world, and the fascinating people who have mastered its inherent power

Counting is not innate to our nature, and without education humans can rarely count past three — beyond that, it’s just “more.” But once harnessed by our ancestors, the power of numbers allowed humanity to flourish in ways that continue to lead to discoveries and enrich our lives today.

Ancient tax collectors used basic numeracy to fuel the growth of early civilization, navigators used clever geometrical tricks to engage in trade and connect people across vast distances, astronomers used logarithms to unlock the secrets of the heavens, and their descendants put them to use to land us on the moon. In every case, mathematics has proved to be a greatly underappreciated engine of human progress.

In this captivating, sweeping history, Michael Brooks acts as our guide through the ages. He makes the case that mathematics was one of the foundational innovations that catapulted humanity from a nomadic existence to civilization, and that it has since then been instrumental in every great leap of humankind. Here are ancient Egyptian priests, Babylonian bureaucrats, medieval architects, dueling Swiss brothers, renaissance painters, and an eccentric professor who invented the infrastructure of the online world. Their stories clearly demonstrate that the invention of mathematics was every bit as important to the human species as was the discovery of fire. From first page to last, The Art of More brings mathematics back into the heart of what it means to be human.

MICHAEL BROOKS is a science writer with a PhD in quantum physics. He the author of several books, including 13 Things That Don’t Make Sense: The Most Baffling Scientific Mysteries of Our Time and The Quantum Astrologer’s Handbook, a 2017 Daily Telegraph Book of the Year. He lives in the United Kingdom.

"[A] savvy study. . . . Brooks describes a point when a person hits their 'mathematical limit' and gets overloaded, and encourages readers to avoid that feeling by approaching math with a sense of awe. He expertly maintains that spirit throughout. . . . It’s a show-stopping paean to the wonder of numbers."
—Publishers Weekly (starred)

"An eye-opening survey of the real world application of mathematics. . . . Challenging the all-too-common view of mathematics as a boring subject irrelevant to genuine life interests, Brooks unfolds numerous compelling examples showing that mathematics empowers people who perform labors that benefit millions. . . . Behind the powerful formulas, readers also glimpse the often deeply flawed character of the mathematicians who developed them, prompting serious reflection on the need for human wisdom in applying their work. A potent reminder of how mathematics has shaped the modern world."
—Booklist (starred)

“What is the driving force behind the development of human civilization? In this unique and surprising book, Michael Brooks makes the case that it is the growth and progress of mathematics - and he does it in a way that will be interesting to the mathematical and math-phobic alike! As entertaining as it is informative, The Art of More takes us on a journey through the ages, demonstrating how mathematics played a crucial role in the evolution of how we live. Not since Jared Diamond’s Guns, Germs, and Steel has there been such an insightful and compelling analysis of how we got here.”
—Leonard Mlodinow, New York Times bestselling author of The Drunkard’s Walk

“Mathematics is quite unique in that even much earlier results do not change with the passing of time. This book is not only a passionate love letter to mathematics, it offers an important lesson in the appreciation of mathematics, and of its crucial role in humanity’s history.”
—Mario Livio, astrophysicist, and author of Galileo and the Science Deniers

“If you love math, you’ll enjoy this book. But if you’re a little scared of math (as I am), you’ll adore The Art of More. Michael Brooks knows how to tell the hidden stories behind numbers, formulas and logarithms.”
—Andrea Wulf, author of The Invention of Nature

“Michael Brooks has written both a lively history of civilisation, and a delightful introduction to the power of mathematics. Either would be an achievement, but to do both simultaneously is a wonder.”
—Tim Harford, author of The Data Detective

“Suddenly it all makes sense. This brilliant book shows math as something concrete, real, and crucial to our lives, rather than some dry, abstract code designed to make school kids' lives miserable.”
—Charlie Higson, actor and author of the Enemy series

“Michael Brooks has a rare gift for making science come to life, and in this book he is at his best, fusing mathematics with storytelling as he takes us on an exhilarating sweep through human history. The Art of More shows just how deeply numbers have propelled the advance of civilisation. And it does so with enormous narrative brio and good cheer. This is a serious—but seriously readable—history which I enjoyed from the first page to the last.”
—Dan Jones, New York Times best-selling historian

“In this thrilling, colourful and deeply researched book, Michael Brooks tells the epic story of how mathematics has driven human progress, spanning millennia to trace the numerical innovations—from geometry and algebra to the mindbending landscapes of imaginary numbers and extra dimensions—that have woven our history and shape our lives today. Along the way, he explores the passions and intrigues of the people behind the numbers, transforming mathematics from dry equations into a gripping drama. This is math as you’ve never experienced it: inspiring, fun and utterly human.”
—Jo Marchant, author of The Human Cosmos

“From Fermat’s last theorem to quantum computers, pi to probability, slides rules to golden ratios, The Art of More is no mere bluffer’s guide, but a rich introduction to the elegance and importance of mathematics. Michael Brooks shows what a global and multicultural task it has been, ever since prehistory, to figure out how we can benefit from quantification and calculation. He shows that math is not just, as Eugene Wigner said, unreasonably effective for understanding the world, but also unfathomably wonderful in its own right.”
—Philip Ball, science writer and author of Beyond Weird

“A friendly, readable account of the huge influence that mathematics has had on human civilisation. If you've ever wondered what the math you did at school was for, and what it has done for us, you'll find the answer here. Michael Brooks's enthusiasm for the beauty and utility of the subject shines from every page.”
—Ian Stewart, author of What's the Use?

“How brilliant of Michael Brooks to be able to reignite my almost-forgotten childhood love of mathematics. Written with beauty, style and care for the history as well as for the science. A tour de force.”
—Angela Saini, author of Superior: The Return of Race Science

“Michael Brooks has written the formula that reduces to near zero any sense that maths could be a dull subject to study. The Art of More brings to life in accessible, lively terms how maths helps us navigate pandemics, space travel, and encrypted apps—all while celebrating the complicated and fascinating characters, from Euclid to Florence Nightingale, who have pushed our knowledge forward. Why isn't school maths taught like this?”
—David Rowan, founding editor of WIRED UK