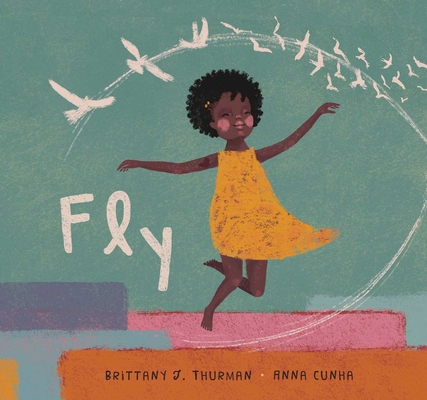 Pure joy and the power of community radiate from this sweet picture book about a young Black girl’s perseverance and confidence in following her double Dutch dreams.

Africa’s grandmother was a double Dutch legend, and Africa knows she can become the same. Her brother scoffs when she signs up for a double Dutch competition, though—how can she hope to compete when she’s never done it before? But Africa has all the tools she needs: memories of her grandmother, her bestie Bianca’s dance moves, her friend Omar’s rhythm, and her classmates’ Mary Mack timing and cartwheels.

If Africa can pull everything together to jump some winning moves, she might just fly, but it’s the birthmark in the shape of her name that tells her she’s always been a winner.

Brittany J. Thurman is the author of Fly, from Caitlyn Dlouhy Books. Brittany holds an MFA in Dramatic Writing from Carnegie Mellon University. During her graduate years at Carnegie Mellon University, Brittany’s plays were produced in Aspen, Colorado, and on New York’s City’s Theatre Row. She is a graduate of Kingston University in London, England, where she spent several years studying theater. She is a former children’s specialist and museum educator, where she advocated for early literacy, reading hundreds of stories to thousands of children across Pittsburgh, Pennsylvania. Brittany currently lives in her hometown of Louisville, Kentucky, where she holds tight to her elders, her roots, and her childhood home. When Brittany isn't writing, you can catch her biking along Louisville’s waterfront, safely travelling, and spending plenty of time with her family.

Anna Cunha is a Brazilian illustrator, living and working in Belo Horizonte. She graduated with a degree in fine arts from Universidade do Estado de Minas Gerais and got a graduate degree in illustration from EINA Universitat Autònoma de Barcelona. She has illustrated more than twenty books for Brazilian and foreign publishers and has won the Aeilij Prize for her work. She’s also been nominated several times for the Jabuti Prize, the most prestigious Brazilian literature prize, been awarded with a special mention at the João-de-Barro Prize, and was one of the Brazilian entrants for the Biennial of Illustration Bratislava.

When a Black child, named Africa for the continent-shaped birthmark on her arm, sees an announcement for a double Dutch competition, she asks her brother what a competition is. “It’s when you show the world what you’re made of,” he replies. Though she’s never played double Dutch before, she decides to compete, “certain she can double Dutch like her grandma used to.” She first attempts to teach herself through books and practice, then asks her brother and her classmates (most of whom have brown skin) to teach her. Not knowing double Dutch, each instead offers her their own special talent—dancing, stepping, “Miss Mary Mack,” double-cartwheels, backflips, and somersaults—and with every lesson, Africa’s confidence grows. On the day of the competition, Africa still doesn’t know the game, but she has the component skills she needs to “jump, fly, double Dutch to the sky” like her Nana, as well as “a birthmark in the shape of her name that’s always shown her what she’s made of.” ... Debut author Thurman tells a community-centered story of one child’s determination to achieve a goal. Naïf-style illustrations by Cunha (A Story About Afiya) feature doll-like rosy cheeks, stippled textures, and a saturated color palette.
— Publishers Weekly

In a sweet story about believing in yourself and following your dreams, Africa, a young girl with a
birthmark in the shape of her name, wants to compete in an upcoming double Dutch competition.
Though she has never done it before... Africa’s grandmother was a double Dutch legend, and Africa is ready to learn.
She enlists her schoolmates for help, but while they haven’t double Dutched either, Africa learns
to dance, step, clap and sing, and cartwheel. With these new skills, self-confidence, and
fearlessness, Africa is ready to show the world what she’s made of. Thurman’s lyrical text, paired
with Cunha’s stunning illustrations, generates an empowering and uplifting experience. The
spare, matte illustrations presented in airy panoramic spreads of earth tones and pastels create
a spectacular visual. The rich and beautiful chalklike textures showcase children of various skin
tones, all with happy faces and prominent rosy cheeks, emphasizing joy. Beautifully written and
illustrated, this is one to be cherished.
— Booklist