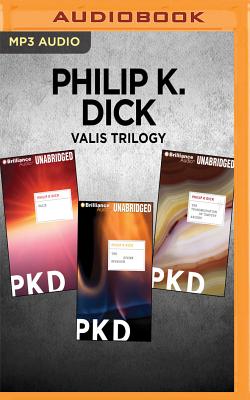 By Philip K. Dick, Phil Gigante (Read by), Dick Hill (Read by)
$14.99
Possibly out of print. Email or call to check availability and price.

VALIS
What is VALIS? This question is at the heart of Philip K. Dick's groundbreaking novel, the first book in his defining trilogy. When a beam of pink light begins giving a schizophrenic man named Horselover Fat (who just might also be known as Philip K. Dick) visions of an alternate Earth where the Roman Empire still reigns, he must decide whether he is crazy or whether a godlike entity is showing him the true nature of the world. VALIS is essential reading for any true Philip K. Dick fan, a novel that Roberto Bolano called "more disturbing than any novel by Carson] McCullers." By the end, like Dick himself, you will be left wondering what is real, what is fiction, and just what the price is for divine inspiration.

THE DIVINE INVASION
God is not dead: he has merely been exiled to an extraterrestrial planet. And it is on this planet that God meets Herb Asher and persuades him to help retake Earth from the demonic Belial. Featuring virtual reality, parallel worlds, and interstellar travel, The Divine Invasion blends philosophy and adventure in a way few authors can achieve. As the middle novel of Dick's VALIS trilogy, The Divine Invasion plays a pivotal role in answering the questions raised by the first novel, expanding that world while exploring just how much anyone can really know -- even God himself.

THE TRANSMIGRATION OF TIMOTHY ARCHER
The final book in Philip K. Dick's VALIS trilogy, The Transmigration of Timothy Archer brings the author's search for the identity and nature of God to a close. The novel follows Bishop Timothy Archer as he travels to Israel, ostensibly to examine ancient scrolls bearing the words of Christ. But more importantly, this leads him to examine the decisions he made during his life and how they may have contributed to the suicides of his mistress and son. This introspective book is one of Dick's most philosophical and literary, delving into the mysteries of religion and of faith itself. As one of Dick's final works, it also provides unique insight into the mind of a genius, whose work was still in the process of maturing at the time of his death.