The Ghosts of Johns Hopkins: The Life and Legacy That Shaped an American City (Hardcover) 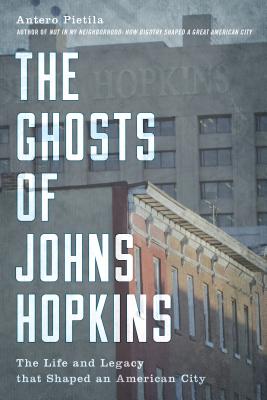 By Antero Pietila
$28.00
Possibly out of print. Email or call to check availability and price.

Johns Hopkins destroyed his private papers so thoroughly that no credible biography exists of the Baltimore Quaker titan. One of America's richest men and the largest single shareholder of the Baltimore & Ohio Railroad, Hopkins was also one of the city's defining developers. In The Ghosts of Johns Hopkins, Antero Pietila weaves together a biography of the man with a portrait of how the institutions he founded have shaped the racial legacy of an industrial city from its heyday to its decline and revitalization. From the destruction of neighborhoods to make way for the mercantile buildings that dominated Baltimore's downtown through much of the 19th century to the role that the president of Johns Hopkins University played in government sponsored "Negro Removal" that unleashed the migration patterns that created Baltimore's existing racial patchwork, Pietila tells the story of how one man's wealth shaped and reshaped the life of a city long after his lifetime.

Antero Pietila's thirty-five years with the Baltimore Sun included coverage of the city's neighborhoods, politics and government but also seven years of reporting as a correspondent in South Africa and the Soviet Union. A native of Finland, where he graduated from Tampere's School of Social Sciences, Pietila became a student of urban racial rotations during his first visit to the United States in 1964. He later obtained a Master of Arts degree at Southern Illinois University, Carbondale. He is the author of Not in My Neighborhood: How Bigotry Shaped a Great American City (2010). He is a contributor to The Life of Kings: The Baltimore Sun and the Golden Age of the American Newspaper, as well as an ebook, Race Goes To War: Ollie Stewart and the Reporting of Black Correspondents in World War II. He resides in Baltimore, MD.