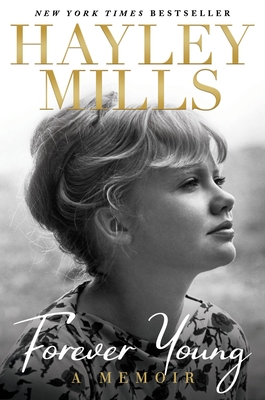 Iconic actress Hayley Mills shares personal memories from her storied childhood, growing up in a famous acting family and becoming a Disney child star, trying to grow up in a world that wanted her to stay forever young.

The daughter of acclaimed British actor Sir John Mills was still a preteen when she began her acting career and was quickly thrust into the spotlight. Under the wing of Walt Disney himself, Hayley Mills was transformed into one of the biggest child starlets of the 1960s through her iconic roles in Pollyanna, The Parent Trap, and many more. She became one of only twelve actors in history to be bestowed with the Academy Juvenile Award, presented at the Oscars by its first recipient, Shirley Temple, and went on to win a number of awards including a Golden Globe, multiple BAFTAs, and a Disney Legacy Award.

Now, in her charming and forthright memoir, she provides a unique window into when Hollywood was still 'Tinseltown' and the great Walt Disney was at his zenith, ruling over what was (at least in his own head) still a family business. This behind-the-scenes look at the drama of having a sky-rocketing career as a young teen in an esteemed acting family will offer both her childhood impressions of the wild and glamorous world she was swept into, and the wisdom and broader knowledge that time has given her. Hayley will delve intimately into her relationship with Walt Disney, as well as the emotional challenges of being bound to a wholesome, youthful public image as she grew into her later teen years, and how that impacted her and her choices--including marrying a producer over 30 years her senior when she was 20! With her regrets, her joys, her difficulties, and her triumphs, this is a compelling read for any fan of classic Disney films and an inside look at a piece of real Hollywood history.

Hayley Mills began her acting career as a child at age 12 and was soon hailed as a rising star, winning the Academy Juvenile Award (as one of only twelve actors to ever be bestowed with this honor), BAFTA Award for Most Promising Newcomer, and Golden Globe Award for New Star of the Year. Her six-picture deal with Walt Disney made her an international star and included her dual role as the twins Sharon and Susan in The Parent Trap. For her success with Disney, she received the Disney Legend Award.

Hayley’s role in Whistle Down the Wind, a 1961 adaptation of the novel written by her mother Mary Hayley Bell, secured her a nomination for the BAFTA award for Best British Actress. She has continued to make films and TV drama, among them The Flame Trees of Thika, and featured as Miss Bliss in Saved by the Bell, and as Caroline in Wild at Heart on ITV. She lives in south-west London.

"As charming on the page as she's ever been on the screen. Her memoir touches on growing up in a family of performers, thoughtfully considers life as a child star, and finds honest, often very funny, ways to examine what it means to live in and around the spotlight...Delightful."—Town & Country

"A greatly enjoyable and eye-opening memoir: a showbusiness chronicle which proves equal parts celebration and cautionary tale...Forever Young is an unexpected treat: a brave and revealing memoir with nary a dull passage."—Wall Street Journal

"With a novelistic eye for detail and a disarming sense of humor, Mills illuminates her extraordinary past while evoking the lost empire of mid-20th-century Hollywood...The result is a luminous work commensurate with the unforgettable movies that made Mills an icon.”—Publishers Weekly (starred review)

“A natural storyteller, as so many actors are, Mills takes us on that wide-eyed 12-year-old’s journey […] If you loved those Disney movies, or just want to get a sense of what life was like in a Hollywood very different from how it is today, Forever Young is a pleasure. One of its joys is watching Mills grow up on the page, learning to love her craft.”—The Seattle Times

"Hayley’s insights into Disney and the interaction between Disney and Hayley and the Mills family are worth the price of admission...You’ll likely love reading this behind-the-scenes account of what our Hayley was really up to during her formative years."—New York Journal of Books

“The iconic star of Pollyanna and The Parent Trap recalls her rise to stardom, her experiences on
set, and her friendship with Walt Disney in this endearing memoir.…A warmhearted peek behind the curtain at youthful fame and filmmaking in the 1960s.”—Booklist

"Child star Mills’s charming and eloquent walk down memory lane is a fascinating study of moviemaking in 1960s Britain and the United States...Movie buffs will be riveted by Mills’s behind the scenes tales."—Library Journal

"This memoir by the English actress who rose to fame as a child star for Disney is rather like a Disney movie: enchanting, entertaining and only fleetingly dark."—Shelf Awareness

"Hayley writes frankly and cogently about her life, her experiences...The reader is also treated to the behind the scenes of the movie making process...A must read for the Hayley Mills fan, but it is also a salient, relevant chronicle of an actor’s life - not only a life against the backdrop of a busy movie making career but a life where conflicts musts be addressed and resolved."—Post-Gazette