Tanking to the Top: The Philadelphia 76ers and the Most Audacious Process in the History of Professional Sports (Hardcover) 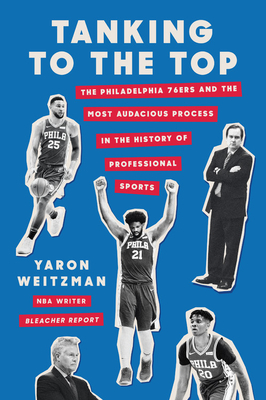 By Yaron Weitzman
$28.00
Not in stock. Available To Order.

Enter the City of Brotherly Love and see how the NBA's Philadelphia 76ers trusted The Process–using a bold plan to get to first by becoming the worst.

When a group of private equity bigwigs purchased the Philadelphia 76ers in 2011, the team was both bad and boring. Attendance was down. So were ratings. The Sixers had an aging coach, an antiquated front office, and a group of players that could best be described as mediocre.

Enter Sam Hinkie—a man with a plan straight out of the PE playbook, one that violated professional sports' Golden Rule: You play to win the game. In Hinkie's view, the best way to reach first was to embrace becoming the worst—to sacrifice wins in the present in order to capture championships in the future. And to those dubious, Hinkie had a response: Trust The Process, and the results will follow.

The plan, dubbed "The Process," seems to have worked. More than six years after handing Hinkie the keys, the Sixers have transformed into one of the most exciting teams in the NBA. They've emerged as a championship contender with a roster full of stars, none bigger than Joel Embiid, a captivating seven-footer known for both brutalizing opponents on the court and taunting them off of it.

Beneath the surface, though, lies a different story, one of infighting, dueling egos, and competing agendas. Hinkie, pushed out less than three years into his reign by a demoralized owner, a jealous CEO, and an embarrassed NBA, was the first casualty of The Process. He'd be far from the last.

Drawing from interviews with nearly 175 people, Tanking to the Top brings to life the palace intrigue incited by Hinkie's proposal, taking readers into the boardroom where the Sixers laid out their plans, and onto the courts where those plans met reality. Full of uplifting, rags-to-riches stories, backroom dealings, mysterious injuries, and burner Twitter accounts, Tanking to the Top is the definitive, inside story of the Sixers' Process and a fun and lively behind-the-scenes look at one of America's most transgressive teams.

Yaron Weitzman is an award-winning NBA writer for Bleacher Report and a former senior writer for the magazine SLAM. He has an MFA in Writing from Manhattanville College and his work has also been published in ESPN, the New Yorker, New York Magazine, the Ringer, the Athletic, SB Nation, Tablet Magazine, and more.

"The author's analysis is convincing and his reporting thorough. TANKING TO THE TOP is the best basketball book in years."
The Wall Street Journal

"The Philadelphia 76ers are nervous about you reading TANKING TO THE TOP -- with good reason. Yaron Weitzman digs deep into the core of the organization's famous (and infamous) "Process," showing the reader every high, low, success, failure, and, yes, wart. It's a gem of a book; a gift to basketball junkies fascinated by mechanisms of the NBA."Jeff Pearlman, New York Times bestselling author of Gunslinger and Boys Will Be Boys

"Through exhaustive reporting, Yaron Weitzman expertly takes us on a thrill ride through perhaps the NBA's grandest and greatest experiment. The Process was Moneyball on steroids, and Weitzman is our nimble guide through all the drama inside of the board room and on the basketball court. It's the best NBA book in years."Jonathan Abrams, New York Times bestselling author of All The Pieces Matter and Boys Among Men

"'The Process' was the boldest, brashest, diciest, most controversial roster-building exercise we've seen in the NBA. Sam Hinkie's gambit alarmed fans and outraged NBA executives -- and it worked. But the Sixers' rise from laughingstock to contender was so much more complex and layered than a two-word catch phrase. In TANKING TO THE TOP, Yaron Weitzman unearths new details and fresh insights, with an insider's expertise and a deft touch, providing the definitive account of this fascinating saga."Howard Beck, senior NBA writer, The Bleacher Report

"There are layers to the brilliance of this book: The reporting is generally way deeper than what's come before. Much of the writing about "The Process" only muddies the waters, adds noise where we are desperate for signal. Here, for the first time, is an account that will confuse no one: Yes, this is what Sam Hinkie was trying to do; yes, it failed in some ways, and succeeded in others. The lucky readers of TANKING TO THE TOP will gain the insight to judge what was what. And finally, even with all of this new information to impart...it's still sexy and fun to read. How in the hell did he do that?"Henry Abbott, founder and CEO, TrueHoop

"TANKING TO THE TOP is a must-read not just for 76ers fans, but for basketball nuts everywhere. It's an illuminating, thrilling, fun, page-turning account about one of basketball's most intriguing and innovative franchises. Weitzman's eye for detail separates him from every other NBA reporter out there today. He paints a new and vivid portrait of a franchise most think they already know everything about. His ability to uncover little gems that most reporters miss makes TANKING TO THE TOP a masterclass in sports storytelling. This book takes readers directly inside the locker room and meeting rooms, making the reader feel like he himself is on the court, figuring out how to navigate the dramatic, insane, thrilling, high-stakes nature of winning at all costs in the modern NBA."p.p1 {margin: 0.0px 0.0px 0.0px 0.0px; line-height: 17.0px; font: 14.7px Arial; color: #000000; -webkit-text-stroke: #000000; background-color: #ffffff}span.s1 {font-kerning: none}Mirin Fader, The Bleacher Report

"Whether you thought The Process was brilliant or you despised it, you had to pay attention to it. The Sixers' approach to roster construction under Sam Hinkie was one of the NBA's most controversial experiments -- and it worked. Yaron Weitzman gives you the most detailed account of The Process to date, showing all of the successes, failures and everything in between in TANKING TO THE TOP, an expertly-reported look at the Sixers and the NBA as a whole. Weitzman's book provides fresh anecdotes and information about the comings and goings in Philadelphia to give you a greater understanding of one of the most audacious plans in the modern NBA."
Ian Begley, NBA insider, SNY

"An account replete with insider information of the ups and downs of 'The Process' and its architect. Readers interested in the business of basketball, and how it affects teams and players above all, will find this a must-read."
Library Journal

"TANKING TO THE TOP is a...very entertaining tick-tock of a unique episode in Philadelphia sports history."Write Now Philly

"The jury is still out on the 76ers, but Weitzman offers a fascinating review of the tanking-to-the-top philosophy, including statistical analysis."
Booklist