The Dance of Life: The New Science of How a Single Cell Becomes a Human Being (Hardcover) 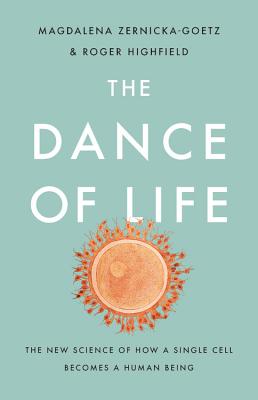 A renowned biologist's cutting-edge and unconventional examination of human reproduction and embryo research
Scientists have long struggled to make pregnancy easier, safer, and more successful. In The Dance of Life, developmental and stem-cell biologist Magdalena Zernicka-Goetz takes us to the front lines of efforts to understand the creation of a human life. She has spent two decades unraveling the mysteries of development, as a simple fertilized egg becomes a complex human being of forty trillion cells. Zernicka-Goetz's work is both incredibly practical and astonishingly vast: her groundbreaking experiments with mouse, human, and artificial embryo models give hope to how more women can sustain viable pregnancies. Set at the intersection of science's greatest powers and humanity's greatest concern, The Dance of Life is a revelatory account of the future of fertility -- and life itself.

Magdalena Zernicka-Goetz is Professor of Mammalian Development and Stem Cell Biology at the University of Cambridge, where she runs a laboratory in the Department of Physiology, Development and Neuroscience. She is also a Fellow of Sidney Sussex College and a Wellcome Trust Senior Research Fellow. She holds several patents related to diagnosis and treatment, and has published 117 papers in major journals such as Nature, Science, and Cell. She lives in Cambridge, UK.
Roger Highfield is an author, journalist, broadcaster, and Science Director at the Science Museum Group. He is also Visiting Professor of Public Engagement at the University of Oxford and University College London. Prior to his work at the Science Museum Group, he was the editor of New Scientist and the science editor of the Daily Telegraph. He has written or co-authored eight popular science books, and edited J. Craig Venter's autobiography, A Life Decoded (Allen Lane/Viking, 2007), which was shortlisted for the Royal Society's Science Book Prize. He lives in London, UK.

"What amazing force puts 40 trillion cells (more cells than there are stars in the galaxy) into the right order to make a human? In The Dance of Life Magdalena Zernicka-Goetz and Roger Highfield reveal answers, some with profound implications for the future of pregnancy."—New Scientist

"Illuminating...Zernicka-Goetz and Highfield's informative professional memoir has much to engage readers."
—Publishers Weekly

"An in-depth journey through the world of the research embryologist.... The story has a memoir like atmosphere, especially when Zernicka-Goetz turns to episodes of her life. But she is never far from the science, as when she writes about her pregnancy and her son, who had chromosome irregularities, which became a topic of her research.... Meaty and entertaining."
—Kirkus

"A touching, detailed portrait of a life in science. Beautifully written, it's a reminder that scientists are human and their humanity affects every part of their work."
—Angela Saini, author of Inferior: How Science Got Women Wrong -- and the New Research That's Rewriting the Story

"How an entire human can emerge from a single cell is one of the great mysteries of life. This book is a wonderful exposition of that amazingly complicated process, and combines Zernicka-Goetz's research and expert perspective with the clear and engaging narrative that is a hallmark of Highfield's science writing."
—Venki Ramakrishnan, president of the Royal Society and recipient of the Nobel Prize in Chemistry

"Part memoir, part mission to touch creation itself, The Dance of Life is a candid & gripping odyssey into one of the greatest microscopic scientific mysteries of all -- the cellular divisions that spawn human life."—Samira Ahmed, author of Internment

"Few books succeed as well as this in taking a complex area of rapidly advancing science, and turning it into a compelling human story. Rarely will you read such an intimate and personal account of scientific discovery."
—Evan Davis

"Magdalena Zernicka-Goetz has written a memoir from the heart. It is a lovely evocation of the triumphs and crushing disappointments on the rollercoaster ride in the pursuit of scientific truth. It is an engaging personal story full of the challenges of negotiating the interface between personal and scientific aspirations from a gifted and successful woman scientist who has managed it well."
—Virginia E. Papaioannou, professor emerita of genetics and development, Columbia University

"The question of how a gorgeous baby develops from an inanimate, post-coital speck has fascinated humans from the year dot. Highfield and Zernicka-Goetz illuminate this apparent miracle in an entertaining narrative full of scientific insights, human interest and thoughtful reflection."
—Graham Farmelo, author of The Universe Speaks in Numbers

"Of all the biological sciences, developmental biology may be the most complicated, but Magdalena Zernicka-Goetz makes it easier in The Dance of Life. An accomplished researcher whose discoveries in this field truly rewrote textbooks, she offers a rich, detailed look at how humans arise from the union of two cells. In tracing her path as a woman in the male-dominated areas of embryology and developmental biology, Zernicka-Goetz takes the reader with ease through the incredibly complex dance of life that cells undertake in building a human embryo."—Emily Willingham, coauthor of The Informed Parent

"How does a single fertilized egg know how to develop into the trillions of different cells that making up a human? This book provides you with much more than the answer -- it is story-telling at its very best. Together with Highfield, Zernicka-Goetz leads us through her life scientific, intertwining the exciting field of 21st biology with a joyous personal journey of discovery at the cutting edge of research."
—Jim Al-Khalili, coauthor of Life On the Edge

"Quite simply the best book about science and life that I have ever read."
—Alice Roberts, professor of public engagement in science, University of Birmingham