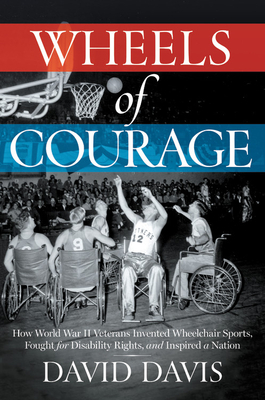 By David Davis
$28.00
Possibly out of print. Email or call to check availability and price.

Out of the carnage of World War II comes an unforgettable tale about defying the odds and finding hope in the most harrowing of circumstances. Wheels of Courage tells the stirring story of the soldiers, sailors, and marines who were paralyzed on the battlefield during World War II-at the Battle of the Bulge, on the island of Okinawa, inside Japanese POW camps-only to return to a world unused to dealing with their traumatic injuries. Doctors considered paraplegics to be "dead-enders" and "no-hopers," with the life expectancy of about a year. Societal stigma was so ingrained that playing sports was considered out-of-bounds for so-called "crippled bodies." But servicemen like Johnny Winterholler, a standout athlete from Wyoming before he was captured on Corregidor, and Stan Den Adel, shot in the back just days before the peace treaty ending the war was signed, refused to waste away in their hospital beds. Thanks to medical advances and the dedication of innovative physicians and rehabilitation coaches, they asserted their right to a life without limitations. The paralyzed veterans formed the first wheelchair basketball teams, and soon the Rolling Devils, the Flying Wheels, and the Gizz Kids were barnstorming the nation and filling arenas with cheering, incredulous fans. The wounded-warriors-turned-playmakers were joined by their British counterparts, led by the indomitable Dr. Ludwig Guttmann. Together, they triggered the birth of the Paralympic Games and opened the gymnasium doors to those with other disabilities, including survivors of the polio epidemic in the 1950s.Much as Jackie Robinson's breakthrough into the major leagues served as an opening salvo in the civil rights movement, these athletes helped jump-start a global movement about human adaptability. Their unlikely heroics on the court showed the world that it is ability, not disability, that matters most. Off the court, their push for equal rights led to dramatic changes in how civilized societies treat individuals with disabilities: from kneeling buses and curb cutouts to the Americans with Disabilities Act of 1990. Their saga is yet another lasting legacy of the Greatest Generation, one that has been long overlooked. Drawing on the veterans' own words, stories, and memories about this pioneering era, David Davis has crafted a narrative of survival, resilience, and triumph for sports fans and athletes, history buffs and military veterans, and people with and without disabilities.

David Davis has documented the culture of sports-in words, images, and sound-for nearly three decades. He was trained as a journalist, and his work has appeared in, among others, Sports Illustrated, Smithsonian Magazine, The New York Times, The Los Angeles Times, The Wall Street Journal, Deadspin, and Vice. David has won numerous journalism and writing awards, and his LA Weekly story about boxer Jerry Quarry ("The Thirteenth Round") was selected for The Best American Sports Writinganthology in 1996.
Miscellaneous Entertainment, a production company based in Hollywood, has optioned the film rights to his book Waterman. David was born and raised in New York City, and lives in Los Angeles.

"This is an important and groundbreaking story about World War II veterans and their great courage to rise above their afflictions through the path of athleticism. They awakened the public that we are complete human beings who belong in society."—Ron Kovic, author of Born on the 4th of July

"Wheels of Courage tells another remarkable story from the Greatest Generation: the invention of wheelchair basketball. Well written and meticulously researched, David Davis sheds light on a story of courage, inspiration, and hope that is a must read for all basketball fans."—Douglas Stark, author of Wartime Basketball: The Emergence of a National Sport during World War II

"In this masterful narrative, David Davis tells a great story of courage and innovation. By uncovering this lost story of the greatest generation, Davis provides inspiration for those living today."—Paul Dickson, author of The Rise of the G.I. Army

"The most thoroughly researched and best-written book ever written on wheelchair basketball."—Armand "Tip" Thiboutot, co-author of Wheelchairs Can Jump!

Wheels of Courage belongs on every "best of" 2020 booklist. Not only is this a deeply human and inspiring story. Through the lives of three men who pioneered wheelchair basketball at V.A. hospitals, we see taboos crumble and a social movement in its infancy. It is also a remarkable sports story. It is a story of how the participants, spectators, and supporters of wheelchair athletics made sports for people with disabilities a part of the American sporting landscape.—Clayton Trutor, DowntheDrive.com

"Wheels of Courage is the best kind of nonfiction - it's packed with history, reads like a fast-paced novel and will give you a new understanding of the origins of disability culture as we know it."—Ian Ruder, Editor of New Mobility Magazine

"Fascinating in its detail. Moving in its humanity. And deeply connected to themes, events, and emotions well beyond the competition itself."—Bob Costas