Wrong Side of History: America's Alliance with Islamic Terrorists (Paperback) 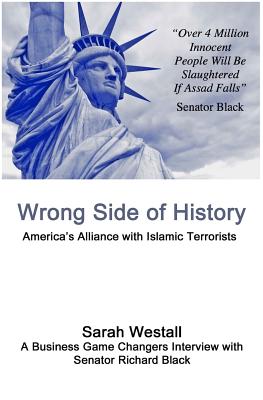 "Over 4 Million Innocent People Will Be Slaughtered If Assad Falls", Senator Richard Black describing the misguided efforts of the United State's crusade to take out President Bashar al Assad of Syria. What you will not hear in the media, which will be shared with you in this book, is that the United States has formed an unwritten alliance with Saudi Arabia, Qatar, and Turkey to take out Assad, the president of Syria. These three regimes are some of the most brutal, oppressive regimes that have ever existed in human history. It is well documented that they all have brutal dictatorships with aggressively oppressive governments. Senator Richard Black has studied Syria every day for the past 7 years. With his experience in the Middle East, as well as his day to day studies, he felt compelled in 2014 to write a letter directly to President Assad. The complete details of that letter is included in this book along with Senator Black's own words as to why he wrote the letter and what he hoped would come out of it. Not long after the letter was sent, President Assad reached out to Senator Black and invited him to visit the country. Consequently, Black went on a 3-day visit to meet and to talk with President Assad directly in Syria. You will learn what happened during that trip to Syria and what Senator Black learned about the country and about both Bashar al Assad and his wife Asma Assad. You will also learn how and why tensions between Russia and the United States have escalated unnecessarily and have become very serious. Black shares the downward path NATO has been on for the last three decades; from a defensive peace coalition to a brutal organization that continues war for its own survival. This ebook includes the transcript from an interview with Senator Richard Black on Business Game Changers radio with Sarah Westall. It also includes additional content and documents, including Black's letter to President Assad.

Sarah Westall is a successful entrepreneur and business executive. In the past 25 years, she has created and developed multiple companies including a successful management and consulting firm and a multi-million-dollar international import and manufacturing company. She has a dynamic leadership career spent building high-performance teams in highly competitive industries. She has an entrepreneurial attitude, energy, and style. She has proven ability to define company positioning by driving the development and execution of innovation, market entry plays, long-term growth, strategy, business development and strategic initiatives. Sarah has a computer science and business management systems degree from the College of Science and Engineering at the University of Minnesota with an emphasis in Management Information Systems from the Carlson Business School. Sarah started her career at the center of the Internet revolution at US West communications where she was promoted multiple times to eventually become director of the advanced networking group responsible for all of the systems design and development for !NTERPRISE, the Internet and Networking arm of US West. At the time, the company captured 75% of the frame relay market, the backbone of the Internet. They also engaged in partnerships with Microsoft, NeXT, Time Warner, and other leaders in the fast growing telecommunications industry in the early 90's. Later, Sarah left the corporate world and started her own enterprise. While starting her business she also attended the University of Colorado working towards her MBA. After completing most of the coursework, her business, Ichor Corporation exploded, forcing her to switch focus and invest all of her energies in managing the fast growth multi-million-dollar business. Currently, Sarah is a partner at Galex Consulting, an adjunct at the University of Minnesota's top rated Carlson business school teaching classes in leadership, ethics, management, and entrepreneurship, and the host of the national radio show, "Business Game Changers". Her national radio show features leaders in Business, Government, Society, and Science. Her significant experience and knowledge in technology, systems engineering, business, and entrepreneurship provides insight and depth unparalleled in the media.