Viola Desmond's Canada: A History of Blacks and Racial Segregation in the Promised Land (Paperback) 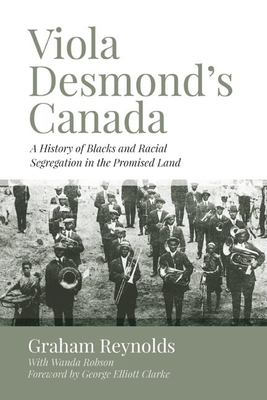 By Graham Reynolds, George Elliott Clarke (Foreword by), Wanda Robson (With)
Email or call for price

Winner of the 2017 Robbie Robertson Dartmouth Book Award for Non-Fiction
The Miramichi Reader's best non-fiction book of 2016 In 1946, Viola Desmond was wrongfully arrested for sitting in a whites-only section of a movie theatre in New Glasgow, Nova Scotia. In 2010, the Nova Scotia Government recognized this gross miscarriage of justice and posthumously granted her a free pardon.
Most Canadians are aware of Rosa Parks, who refused to give up her seat on a racially segregated bus in Alabama, but Viola Desmond's act of resistance occurred nine years earlier. However, many Canadians are still unaware of Desmond's story or that racial segregation existed throughout many parts of Canada during most of the twentieth century. On the subject of race, Canadians seem to exhibit a form of collective amnesia.
Viola Desmond's Canada is a groundbreaking book that provides a concise overview of the narrative of the Black experience in Canada. Reynolds traces this narrative from slavery under French and British rule in the eighteenth century to the practice of racial segregation and the fight for racial equality in the twentieth century. Included are personal recollections by Wanda Robson, Viola Desmond's youngest sister, together with important but previously unpublished documents and other primary sources in the history of Blacks in Canada. NEW: Teaching Guide Available Here.

Graham Reynolds is a professor emeritus and the Viola Desmond Chair in Social Justice at Cape Breton University.He is the author (with Wanda Robson) of Viola Desmond's Canada: A History of Blacks and Racial Segregation in the Promised Land, winner of the 2017 Robbie Robertson Atlantic Book Award for Non-Fiction.