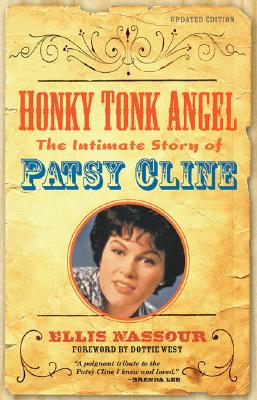 By Ellis Nassour, Dottie West (Foreword by)
$24.99
Not in stock. Available To Order.

Earthy, sexy, and vivacious, the life of beloved country singer, Patsy Cline, who soared from obscurity to international fame to tragic death in just thirty short years, is explored in colorful and poignant detail. An innovator—and even a hell-raiser—Cline broke all the boys’ club barriers of Nashville’s music business in the 1950s and brought a new Nashville sound to the nation with her pop hits and torch ballads like “Walking After Midnight,” “I Fall to Pieces“ and "Crazy.” She is the subject of a major Hollywood movie and countless articles, and her albums are still selling 45 years after her death. Ellis Nassour was the very first to write about Cline and did so with the cooperation of the stars who knew and loved her—including Jimmy Dean, Jan Howard, Brenda Lee, Loretta Lynn, Roger Miller, Dottie West, and Faron Young. He was the only writer to interview Cline's mother and husbands. This updated edition features not only a complete discography and a host of never-before-published photographs, but includes an afterword that details controversial claims about her birth, the battle between Cline's siblings for her possessions, the amazing influence Cline had on a new generation of singers and, in Cline’s own words from letters to a devoted friend, her excitement as her career soared to new heights and her marriage descended to new depths.

Ellis Nassour is a veteran of The New York Times and an entertainment writer. He has devoted the past 15 years to promoting the legacy of Patsy Cline, and has been involved in two musicals of her story.

"Cline was a woman of great passion, prone to her own style of sexual braggadocio, and Nassour gives us all the earthiness of this most sublime singer."  —Phoenix Gazette

"Ellis Nassour’s biography doesn’t just paint an image of the Patsy Cline I knew and loved. What really emerges is a poignant tribute to one of our greatest singing legends."  —Brenda Lee, American pop singer and member of the Rock and Roll Hall of Fame, the Country Music Hall of Fame, and Rockabilly Hall of Fame

"Honky Tonk Angel brought back wonderful memories. It brings home the fact that Patsy was an original in her cowboy outfit with red boots and western hat singing her butt off, singing her soul at you. There's been no one quite like her."  —Roger Miller