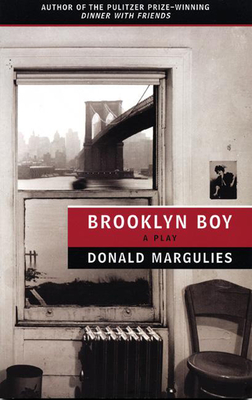 "Donald Margulies has an unerring sense of language and the ability to penetrate deeply into the darkness of tangled human emotions." -Joel Hirschhorn, Variety "Quietly melancholic... Margulies has a near-matchless ear for what common speech can express and what it can only hint at. He explores the queasy relationships between life and art, love and estrangement, and the bane that is American identity drift, with unsparing but compassionate candor." -Misha Berson, Seattle Times "Margulies's remarkable gift of building characterization through realistic dialogue is undiminished. Full of aching ruefulness that underlies the comedy, Brooklyn Boy's scenes are written with precision and humor. The play isn't about Brooklyn, nor is it about a boy--it's about a man without a home." -Don Shirley, Los Angeles Times This new play by the Pulitzer Prize-winning author of Dinner with Friends follows the career of Eric Weiss, a writer whose novel hits the bestseller list the same time his life begins to unravel. His wife is out the door, his father is in the hospital, and his childhood friend thinks he has sold himself to the devil. A funny and emotionally rich look at family, friends and fame. Donald Margulies received the 2000 Pulitzer Prize for Drama for Dinner with Friends. The play received numerous awards, including the American Theatre Critics Association New Play Award, the Dramatists Guild/Hull-Warriner Award, the Lucille Lortel Award, the Outer Critics Circle Award and a Drama Desk nomination, and has been produced all over the United States and around the world. In addition to his adaptation of God of Vengeance, his many plays include Collected Stories, The Country House, Sight Unseen, The Model Apartment, The Loman Family Picnic, What's Wrong with This Picture? and Time Stands Still. Mr. Margulies currently lives with his wife and their son in New Haven, Connecticut, where he teaches playwriting at Yale University.

Donald Margulies's other plays include Collected Stories, The Loman Family Picnic, Sight Unseen and Dinner with Friends, for which he was awarded the 2000 Pulitzer Prize for Drama.