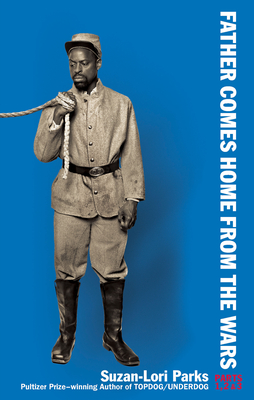 The finest work yet from this gifted writer.--The New York Times

Offered his freedom if he joins his master in the ranks of the Confederacy, Hero, a slave, must choose whether to leave the woman and people he loves for what may be another empty promise. As his decision brings him face to face with a nation at war with itself, the ones Hero left behind debate whether to escape or wait for his return, only to discover that for Hero, freedom may have come at a great spiritual cost. A devastatingly beautiful dramatic work, Father Comes Home from the Wars (Parts 1, 2, & 3) is the opening trilogy of a projected nine-play cycle that will ultimately take us into the present.

Suzan-Lori Parks became the first African American woman to receive the Pulitzer Prize for Drama for her play Topdog/Underdog in 2002. Her other plays include The Book of Grace, In the Blood, Venus, The Death of the Last Black Man in the Whole Entire World, Fucking A, Imperceptible Mutabilities in the Third Kingdom and The America Play. In 2007 her 365 Days/365 Plays was produced at more than seven hundred theaters worldwide. Parks is a MacArthur Fellow and the Master Writer Chair at the Public Theater.

Named one of TIME magazine's "100 Innovators for the Next New Wave," in 2002 Suzan-Lori Parks became the first African American woman to receive the Pulitzer Prize in Drama for her Broadway hit Topdog/Underdog. A MacArthur "Genius" Fellowship recipient, she has also been awarded grants by the National Endowment for the Arts, the Rockefeller Foundation, the Ford Foundation, the New York State Council on the Arts and the New York Foundation for the Arts. She is the recipient of a Lila Wallace-Reader's Digest Award, a CalArts/ Herb Alpert Award in the Arts (Theatre) for 1996 and a Guggenheim Foundation Fellowship. She is an alumna of Mount Holyoke College and New Dramatists. Her numerous plays include Father Comes Home From the Wars (2015 Pulitzer Prize finalist, 2015 Edward M. Kennedy Prize for Drama Inspired by American History, 2014 Horton Foote Prize), The Book of Grace, Topdog/Underdog (2002 Pulitzer Prize), In the Blood (2000 Pulitzer Prize finalist), Venus (1996 OBIE Award), The Death of the Last Black Man in the Whole Entire World, Fucking A, Imperceptible Mutabilities in the Third Kingdom (1990 OBIE Award for Best New American Play) and The America Play. Parks's work on The Gershwins' Porgy and Bess earned the production a Tony Award for Best Revival of a Musical in 2012. In 2007 her 365 Plays/365 Days was produced in more than seven hundred theaters worldwide, creating one of the largest grassroots collaborations in theater history. Her work is the subject of the PBS Film The Topdog Diaries. Suzan-Lori's first novel, Getting Mother's Body, was published by Random House in 2003. Her first feature-length screenplay was Girl 6 written for Spike Lee. She's also written screenplays for Brad Pitt, Denzel Washington, Jodie Foster and Oprah Winfrey, adapting Zora Neale Hurston's classic novel Their Eyes Were Watching God, which premiered on ABC's Oprah Winfrey Presents. As a film actor Parks has appeared in the fictional documentary The Making of Plus One, which premiered at the Cannes Film Festival in 2009. In November 2008 Suzan-Lori Parks became the first recipient of the Master Writer Chair at The Public Theater. At The Public, and as she tours the country, she performs her innovative performance piece, Watch Me Work, a play with action and dialogue/a meta-theatrical writing class. She also serves as a visiting arts professor in dramatic writing at New York University's Tisch School of the Arts. Holding honorary doctorates from Brown University, among others, Suzan-Lori credits her writing teacher and mentor, James Baldwin, for starting her on the path of playwriting. One of the first to recognize Parks's writing skills, Mr. Baldwin declared Parks "an astonishing and beautiful creature who may become one of the most valuable artists of our time."