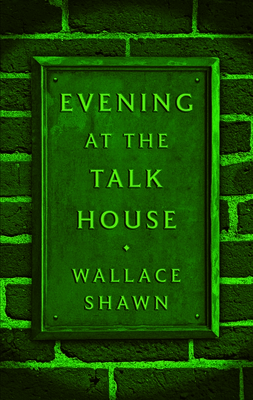 Wallace Shawn is up to his old tricks again: pricking the conscience of right-on, left-leaning theatergoers. No one does that better than this impish, idiosyncratic polymath, who, at seventy-two, still comes across as precocious--probably because we resent him flagging our complacent complicity in all the world's ills.--Variety

The play stops, but has no ending. It is for us to try to answer its bleak questions, to see what it might mean to be undeluded.--The Guardian

Gathering around a table at the Talk House, an old haunt, a group of friends and theatre artists reunite after ten years to reminisce and catch-up on each other's lives. At first, the conversation is fairly run-of-the-mill: current TV shows and where their careers have taken them. Eventually, the discussion's tone takes a turn when they mention supplementing their incomes through the government-led program to enlist unemployed artists for drone strikes and carrying out violent attacks on foreign land. As is typical of Shawn's plays, the premise at once amuses and unsettles, forcing the viewer to wonder whether being too idle makes all of us complicit in the world's ongoing destruction.

Wallace Shawn is a noted actor and writer. His often politically-charged and controversial plays include The Fever, Aunt Dan and Lemon, Marie and Bruce, and The Designated Mourner. With Andre Gregory, he co-wrote My Dinner with Andre , in which he also starred. He adapted the classic Ibsen play A Master Builder for film.