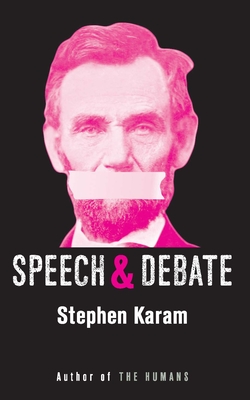 "You might think a play that grapples with serious modern social issues--homophobia, teenage alienation, the limits of online privacy--would have no room for a warbling Abraham Lincoln doing an interpretive dance. But then you might not expect to encounter a piece of theater as ingenious and cannily plotted as Stephen Karam's Speech & Debate. It is a suspenseful tale that fuses keen-eyed civic critique with riotous and even campy humor." - Celia Wren, Washington Post "Hilarious...Speech & Debate's real accomplishment is its picture of the borderland between late adolescence and adulthood, where grown-up ideas and ambition coexist with childish will and bravado...We never feel we're being educated, just immensely entertained." - Caryn James, New York Times
"A provocative play...A lot of shows about teens ring inauthentic. Not this one." - Chris Jones, Chicago Tribune "Stephen Karam's savvy comedy is bristling with vitality, wicked humor, terrific dialogue, and a direct pipeline into the zeitgeist of contemporary youth." - David Rooney, Variety In this unconventional dark comedy, three misfit high school students in Salem, Oregon form a unique debate club, complete with a musical version of The Crucible, an unusual podcast, and a plot to take down their corrupt drama teacher. With his signature wit, Karam traces the cohort's attempts to fend off the menace of encroaching adulthood with caustic humor and subversive antics. Stephen Karam's plays include The Humans (Tony Award and Pulitzer Prize finalist), Sons of the Prophet (Pulitzer Prize finalist), and Speech & Debate. His adaptation of The Cherry Orchard premiered on Broadway for the Roundabout Theatre Company.

Stephen Karam's play The Humans won the 2016 Tony Award for Best Play and was a finalist for the 2016 Pulitzer Prize. Other plays include Sons of the Prophet, a finalist for the 2012 Pulitzer Prize and the winner of the 2012 Drama Critics Circle, Outer Critics Circle, Lucille Lortel and Hull-Warriner awards for Best Play. Born and raised in Scranton, PA, he lives in New York City.