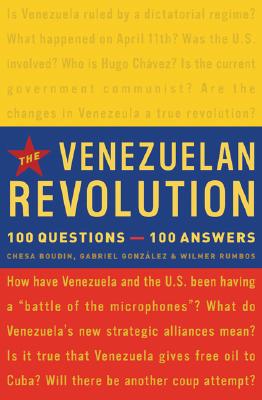 By Chesa Boudin, Gabriel Gonzalez, Wilmer Rumbos
$14.95
Possibly out of print. Email or call to check availability and price.

There is one country in the Americas that the Bush Administration regards as a significant threat to U.S. interests, and it is not Cuba. Oil-rich Venezuela's democratically-elected government has survived repeated, U.S.-supported attempts to undermine its power, including a short lived military coup. Its leader, President Hugo Chávez, is neither communist nor capitalist, and instead claims to be creating an alternative 21st Century socialism that courts international capital. What is the real story behind this leader of Latin America's lurch to the left? Is it a new petro-populism in the tradition of Peron and Fujimori, or is it truly a progressive, home-grown democratic revolution that will address the massive economic and social inequalities plaguing the region for more than three centuries?

The curiosity of a North American living in Venezuela and the expertise of two Venezuelans—one an adviser in the Presidential Palace, and the other a journalist with a weekly column in one of Venezuela's leading newspapers—bring insiders' answers to outsiders' questions, such as: Is Chávez a dictator? What was the role of the Bush Administration in the 2002 military coup? What is Chávez's political platform? Does Chávez work with terrorist governments to undermine U.S. interests?