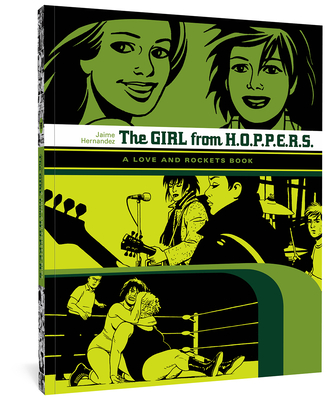 This is book number 4 in the The Complete Love and Rockets Library series.

Ripped from the pages of Love and Rockets: the second comprehensive "Locas" comics collection alternates between wrestling action and the Maggie, Hopey, and Ray D. love triangle.

In The Girl from H.O.P.P.E.R.S., Hernandez refined his artistic storytelling approach, settling into the more naturalistic environment of a fictional Los Angeles neighborhood, Hoppers, and the lives of the people who live there. In stories like "The Death of Speedy," such is Jaime's mastery that even though the title telegraphs the end of the story, the downhill spiral of Speedy, the local heartthrob, is utterly compelling and ultimately shocking. Also in this volume, Maggie begins her on-again off-again romance with Ray D., leading to friction and an eventual separation from Hopey. This volume is the third in a comprehensive and chronological series, The Complete Love and Rockets Library, and the second that collects all of writer-artist Jaime Hernandez's "Locas" storyline in which characters change as they age in "real-time."


These stories, created between 1985–1991, first appeared in the long-running (and ongoing) Love and Rockets comics series, also featuring work by Jaime's brothers, Gilbert and Mario. L&R has been called "the greatest American comic book series of all time" by Rolling Stone and "a great, sprawling American novel" by GQ. It broke ground with its craft and the casual intersectionality of its huge and diverse casts of nuanced characters (many of whom are LGBQTIA+) who live and have relationships in often-naturalistic settings and situations. (Although L&R has SF and magical realist elements too). Along with contemporaries Chris Ware, Lynda Barry, and Daniel Clowes, the Hernandez brothers pushed the comics medium into new artistic heights.

These beautifully drawn stories feature some of the most believable, diverse, and indelible characters in the history of comics. 'The Return of Ray D.' and 'Spring 1982' changed my life, and are still among my favorite short stories in any medium.
— Adrian Tomine (Killing and Dying, Shortcomings)

I liked seeing the progression and development of the series (it was started in the 80s). The art is fantastic and H.O.P.P.E.R.S. stands as a complete world unto itself.

Everything Jaime does is genius, but I thought Ghost of HOPPERS was especially strong. Maybe my favorite since Wigwam Bam.

Jaime’s illustration is beautiful and effortless. His characters mix a near perfect clear-line style with cartoonish expression, used with particular aplomb when emotions are running high. It’s a masterclass in comic illustration.
— Grovel