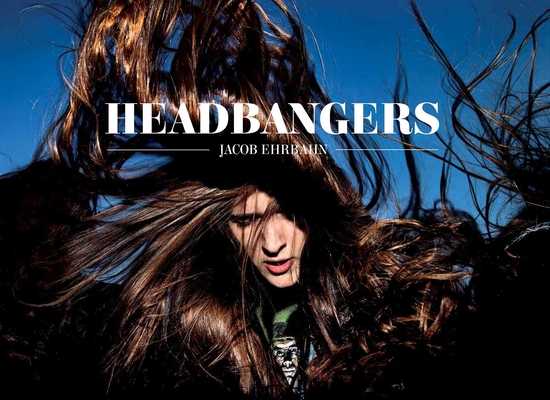 By Jacob Ehrbahn (By (photographer)), Per Folkver (Introduction by)
$40.00
Possibly out of print. Email or call to check availability and price.

Headbangers is a collection of Danish photographerJacob Ehrbahn's intimate portraits of the beautyand chaos of heavy metal rockers in the throes ofmusical ecstasy taken at European metal festivalssuch as Denmark's Copenhell, Germany's WackenOpen Air, and Sweden's Metaltown. Heavy metalfans go totally berserk when listening to their music.Some shake their heads violently from side to sideand back and forth, while others go all in and flailtheir entire bodies in time to the blast beats. In thiscollection Ehrbahn's camera stops time and capturesthe surprising and life-affirming moments whenthe headbangers abandon all semblance of vanityand surrender to the rhythm. Ehrbahn transportsus to an intimate world disconnected from time andspace-a universe where it's possible to transcendthe frenzy and enter an altered state that bringscalm, joy, and relief.

Jacob Ehrbahn is a Danish photojournalist whohas been a staff photographer at the Danish dailynational newspaper Politiken since 2003. Over theyears, Ehrbahn has covered prominent news storiesas well as the daily lives of people throughout theworld. He has received numerous awards for hiswork, including being named second and third placeNewspaper Photographer of the Year by POYi in2003 and 2011. He's a two-time World Press Photowinner with second and third-place prizes in 2004and 2013. In 2015 he was named Photographer ofthe Year in Denmark for the third time. From timeto time, Ehrbahn delves into labors of love on theside, away from his full-time job. Headbangers is oneof these projects.

"Brilliant, energetic and skillyfully shot images of headbangers mid-bang." —It's Nice That

"Headbangers covers a rich milieu of fans, all united by a love for heavy metal music and the cathartic escape of headbanging." —British Journal of Photography

"The beautifully intimate portraits capture moments of uninhibited emotion — both serious and joyous — that would otherwise have been lost in the raucous crowd." —The Week

"Ehrbahn's images are more Humans of Nü Metal than Humans of New York (it's not exactly a diverse crowd) but individuality is definitely at work here, along with expressions of total abandon, catharsis, and occasional joy." —Omnivoracious, The Amazon Book Review

As seen in: The Guardian, Flavorpill, Artsy