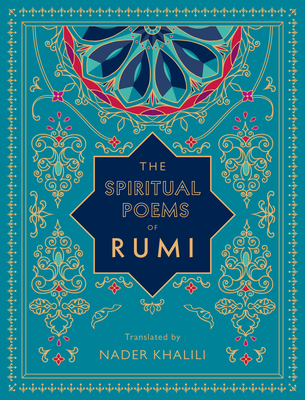 This is book number 3 in the Timeless Rumi series.

Translated by renowned Rumi expert Nader Khalili, over 120 poems on spirituality from the Persian mystic poet and Sufi master have been carefully collected and curated in this beautifully illustrated edition.

For more than eight centuries, Jalaluddin Muhammad Balkhi Rumi—commonly referred to simply as Rumi—has enchanted and enthralled readers from every faith and background with his universal themes of love, friendship, and spirituality, which he seamlessly wove into resplendent poetry.

The verses herein perfectly express the spiritual quest and desire for a deeper understanding of not only ourselves, but also of our collective oneness as humankind.

With intricately designed and richly colored covers that mirror the beauty of the words within, the Timeless Rumi series presents themed collections of poems from the great Sufi mystic Jalaluddin Muhammad Balkhi Rumi that serve as cherished tools for self-reflection.

Jalal ad-Din Rumi, commonly known just as Rumi, was a Persian Sunni Muslim poet, Islamic scholar, theologian, and Sufi mystic whose works, written in the thirteenth century, are popular throughout the world today.

Translator Nader Khalili (1936­­–2008) was a world-renowned Iranian-American architect, author, humanitarian, and teacher. Khalili was also the founder and director of the California Institute of Earth Art and Architecture (Cal-Earth). Khalili was raised by the poetry of Rumi. As a child, his grandmother would recite Rumi’s poetry to lull him to sleep. He later developed a passion for studying and translating Rumi’s works. Rumi’s poetry also became an intrinsic part of Khalili’s architectural career. Inspired by the mystical poetry of Rumi, his architecture was distilled from the timeless principles of this universe and its timeless materials—the elements of earth, air, water, and fire.

The Spiritual Poems of Rumi is of those book that tell you truths you should have known all along but that, for some reason, are not that clear enough…I would recommend this book to anyone who wants to challenge their basic understandings about spirituality, what it means to be a spiritual person, and that wants a thought-provoking reading.—Patheos, A Modern Day Sha'ir