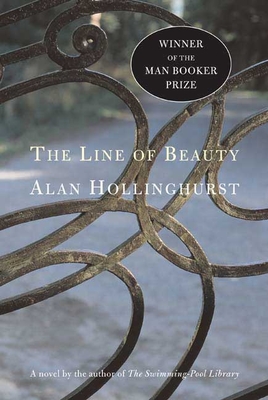 By Alan Hollinghurst
$24.95
Possibly out of print. Email or call to check availability and price.

Winner of the 2004 Man Booker Prize and a finalist for the Lambda Literary Award and the NBCC award. From Alan Hollinghurst, the acclaimed author of The Sparsholt Affair, The Line of Beauty is a sweeping novel about class, sex, and money during four extraordinary years of change and tragedy.

In the summer of 1983, twenty-year-old Nick Guest moves into an attic room in the Notting Hill home of the Feddens: conservative Member of Parliament Gerald, his wealthy wife Rachel, and their two children, Toby--whom Nick had idolized at Oxford--and Catherine, who is highly critical of her family's assumptions and ambitions. As the boom years of the eighties unfold, Nick, an innocent in the world of politics and money, finds his life altered by the rising fortunes of this glamorous family. His two vividly contrasting love affairs, one with a young black clerk and one with a Lebanese millionaire, dramatize the dangers and rewards of his own private pursuit of beauty, a pursuit as compelling to Nick as the desire for power and riches among his friends. Richly textured, emotionally charged, disarmingly comic, this is a major work by one of our finest writers.

ALAN HOLLINGHURST is the author of the novels The Stranger's Child, The Swimming-Pool Library, The Folding Star, The Spell, and The Line of Beauty, which won the Man Booker Prize and was a finalist for the National Book Critics Circle Award. He has received the Somerset Maugham Award, the E. M. Forster Award of the American Academy of Arts and Letters, and the James Tait Black Memorial Prize for Fiction

"If you value style, wit and social satire in your reading, don't miss this elegant and passionate novel."-Washington Post

"His most tender and powerful novel to date." A -Entertainment Weekly

"Each sentence in this book rings as perfect and true as a Schubert sonata."-Hartford Courant

"The Line of Beauty is itself a thing of beauty-an elegant and seductive novel."-Philadelphia City Paper

"It really is his finest novel to date."-Geoff Dyer

"[A] masterpiece with a skillfully rendered social panorama, a Proustian alertness to social nuance and a stylistic precision that recalls [James]."-Newsday

"The most exquisitely written book I've read in years. Witty observations about politics, society, and family open like little revelations on every page." -Christian Science Monitor

"In the tradition of Henry James, Hollinghurst has artfully crafted a piquant satire of privilege and sexuality in all its forms."-Genre Magazine

"The best English novel of the year so far is Alan Hollinghurst's The Line of Beauty."-Zadie Smith, Guardian (UK)

"Like reading gossip in beautifully made sentences with extraordinary insights into motive and nuance, allowing all the time for comedy."-Colm Toibin, Guardian (UK)


"Hollinghurst writes harsh but deeply informed social satire, just as Proust did. He writes the best prose we have today."


"There is something memorable on every page...a shivering yet morally exacting satire that leaves no character untouched"

"Vast scope... smart, funny, and for all its vividly engaging ways, a pretty sound document of the times"

"Must rank among the funniest [novels] ever written about Thatcher's Britain, while remaining one of the most tragically sad"

"A classic of our times…The work of a great English stylist in full maturity; a masterpiece."

"Wonderful... almost unbelievably well-written. In its dazzling, very contemporary way, the book is tragic…But it is also consistently funny"

"Luminous...a crafty, glittering, sidelong bid by a contemporary master of English prose to be considered heir to James himself."

"A magnificent novel...There are literally thousands of impeccably nuanced touches."

"Exquisitely written...Its delights and rewards extend beyond its comic or documentary achievements."

"A richly literate, ambitious piece of work....deserves to be widely read."

"Stunning...a joy to read. It is solid and traditional, beautifully crafted-a quiet masterpiece"