I Guarantee It: The Untold Story behind the Founder of Men's Wearhouse (Hardcover) 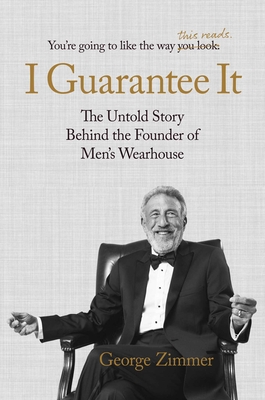 America knew George Zimmer for one of the most famous slogans in television advertising history: “I guarantee it.” Zimmer rode his promise to lead the Men’s Wearhouse to unimagined success as a retail giant. Now, years removed from his stunning dismissal as leader of the company he founded, I Guarantee It recounts the journey of Zimmer’s rise, the fall of the Men’s Wearhouse, and his personal renewal.

For forty-one years, George Zimmer forged a relationship with American men who wanted to like the way they looked without getting too fussy about it.

He made them a promise that came straight from the shoulder: “I guarantee it,” he said, and it was ironclad. By the millions, customers walked into the Men’s Wearhouse stores in all fifty states and Canada, where they received “quality, service, and a good price,” where they bought suits, ties, sports coats, and slacks by the tens of billions of dollars.

Then a backstabbing — the handpicked board of directors fired Zimmer from the company he had created and developed into the most successful men’s specialty store in world history.

Eight years later, Zimmer is back to tell his story: a man raised by a prosperous and loving family, a fun-loving son of the sixties, a merchant, an entrepreneur, a pitchman for the ages.

Zimmer’s ouster devastated but did not destroy him. His is a story of hard work and resilience, about a life in business that succeeded beyond belief and followed the Golden Rule. It’s a story that will teach and inspire.

George Zimmer was the founder of The Men’s Wearhouse clothing chain and CEO, board chair, and television spokesperson for the company for forty-one years. Under Zimmer, The Men’s Wearhouse became the largest men’s specialty chain in history with his famous slogan, “You’re going to like the way you look. I guarantee it.”

Zimmer was raised in Scarsdale, New York, where he showed an early aptitude for business, becoming a circulation manager for a local newspaper when he was still in high school, and later attending college at Washington University where he earned a bachelor’s degree in economics. Mr. Zimmer also played a crucial role as a pioneer and major financial contributor to California’s Proposition 215 in 1996, the first successful statewide medicinal marijuana campaign in the United States.

He lives in Oakland, California, where his primary philanthropic work is focused on the Oakland Zoo.

“George Zimmer is a legendary entrepreneur, a retailing rebel who created an iconic American brand. With great candor and insight, he shares his incredible story of heart and determination, wins and losses, and a commitment to stakeholder capitalism.”
— Marc Benioff, chair and CEO of Salesforce

“Over the decades, I’ve had to deal with George Zimmer on his sartorial expertise. I’ve always been a fan of his, and this book explains why.”
— Willie Brown, former mayor of San Francisco

“George Zimmer is one of the finest political historians that I know. He is a courageous stalwart of progressive ideals and democracy. This book is a great read.”
— Jim Gonzalez, former San Francisco supervisor

“Since my first encounter with George in a private, closed-door meeting with Mikhail Gorbachev at the State of the World Forum back in 1999, I have valued George Zimmer as a special counsel and my personal ethical guide for all my work in the disparate fields. He is a genuine American treasure and a revolutionary visionary, with a famous voice that can now be turned to saving us from ourselves—if we are ready to listen again. I guarantee it!”
— Daniel Sheehan, general counsel to the United States Jesuit Order’s National Office of Social Ministry in Washington, DC, and found of the Christic Institute and the Romero Institute

“George Zimmer is one of my dearest friends who long ago made a commitment to support the things that mattered most to the city of Oakland. His incredible commitment to the Oakland Zoo, and to the children of Northern Light School, has given me such hope for the future of this beautiful city.”
— Cornell C. Maier, World War II veteran, retired chairman and CEO of Kaiser Aluminum

“From the moment I met George Zimmer I knew we were in the presence of a very great man. George came to speak to the children of Northern Light School as one of our Impossible Is Nothing speakers. He shared with them his secret to persevering throughout his many years of overcoming tremendous obstacles, making history, and leaving his profound mark on others and the business world as founder and head of one of the most prominent and successful companies throughout this country. As he spoke, I listened with great admiration to his profound words characterized by compassion, wisdom, dedication, commitment, and unconditional love.”
— Michelle Lewis, founder and executive director of Northern Light School

“I left a career at the Men’s Wearhouse to go back to work for George. He is a great boss—and his book is pretty good too.”
— Jason Jackson, president of Generation Tux

“I Guarantee It shows the rewards of determination, hard work, believe in yourself, and vision.”
— Joel Parrot, president and CEO of the Oakland Zoo

“An unconventional, charismatic, enormously successful business leader, George Zimmer shows how to help people become better than they ever thought they could and how business can transform society for good.”
— Jeffrey Pfeffer, professor of organizational behavior at Stanford’s Graduate School of Business and author of The Human Equation

“In I Guarantee It, George Zimmer takes you on a guided tour of his universe.”
— Alex Filippenko, astrophysicist, UC Berkeley