A Man Without a Country (Hardcover) 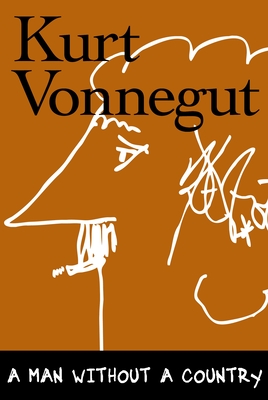 A Man Without a Country is Kurt Vonnegut’s hilariously funny and razor-sharp look at life ("If I die—God forbid—I would like to go to heaven to ask somebody in charge up there, ‘Hey, what was the good news and what was the bad news?"), art ("To practice any art, no matter how well or badly, is a way to make your soul grow. So do it."), politics ("I asked former Yankees pitcher Jim Bouton what he thought of our great victory over Iraq and he said, ‘Mohammed Ali versus Mr. Rogers.’"), and the condition of the soul of America today ("What has happened to us?").
Based on short essays and speeches composed over the last five years and plentifully illustrated with artwork by the author throughout, A Man Without a Country gives us Vonnegut both speaking out with indignation and writing tenderly to his fellow Americans, sometimes joking, at other times hopeless, always searching.

Born in 1922 in Indianapolis, Indiana, KURT VONNEGUT was one of the few grandmasters of modern American letters. Called by the New York Times “the counterculture’s novelist,” his works guided a generation through the miasma of war and greed that was life in the U.S. in second half of the 20th century. After a stints as a soldier, anthropology PhD candidate, technical writer for General Electric, and salesman at a Saab dealership, Vonnegut rose to prominence with the publication of Cat’s Cradle in 1963. Several modern classics, including Slaughterhouse-Five, soon followed. Never quite embraced by the stodgier arbiters of literary taste, Vonnegut was nonetheless beloved by millions of readers throughout the world. “Given who and what I am,” he once said, “it has been presumptuous of me to write so well.” Kurt Vonnegut died in New York in 2007.

"During the darkest years of the Bush administration, these essays … were guide and serum to anyone with a feeling that pretty much everyone had lost their minds.” —Dave Eggers

“[L]ike his literary ancestor Mark Twain, his crankiness is good-humored and sharp-witted, and aimed at well-defended soft spots of hypocrisy and arrogance … On Nov. 11—the holiday Vonnegut, who was a P.O.W. in Germany in World War II, has always preferred to think of as Armistice Day—he will turn 83, and since he has no expectation of a heavenly perch from which to look down and eavesdrop on his friends, it is best that we appreciate him while he's still around. A Man Without a Country' is a fine place to start, especially since it can lead us back to Mother Night and Slaughterhouse-Five and The Sirens of Titan and the stories collected in Bagombo Snuff Box. In other words, it's like sitting down on the couch for a long chat with an old friend.” —The New York Times Book Review

“Although A Man Without a Country has its roots in ... essays and public statements, it is, at heart, a different type of project, fuller, more integrated, not a collection of loose ends so much as a testament … Certainly, A Man Without a Country is as overtly political a book as Vonnegut has written, a lament for an America that is no longer, in which, the author argues, social justice has been subsumed by war and fear. At the same time, it may be as close as Vonnegut ever comes to a memoir, with its mix of autobiography and social commentary, its reflections on topics as varied as our fossil fuel addiction and longtime heroes like Twain and labor and political leader Eugene V. Debs.” —Los Angeles Times