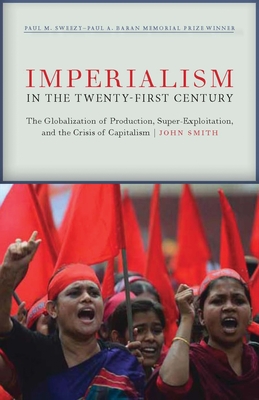 Winner of the first Paul A. Baran-Paul M. Sweezy Memorial Award for an original monograph concerned with the political economy of imperialism, John Smith's Imperialism in the Twenty-First Century is a seminal examination of the relationship between the core capitalist countries and the rest of the world in the age of neoliberal globalization.Deploying a sophisticated Marxist methodology, Smith begins by tracing the production of certain iconic commodities-the T-shirt, the cup of coffee, and the iPhone-and demonstrates how these generate enormous outflows of money from the countries of the Global South to transnational corporations headquartered in the core capitalist nations of the Global North. From there, Smith draws on his empirical findings to powerfully theorize the current shape of imperialism. He argues that the core capitalist countries need no longer rely on military force and colonialism (although these still occur) but increasingly are able to extract profits from workers in the Global South through market mechanisms and, by aggressively favoring places with lower wages, the phenomenon of labor arbitrage. Meticulously researched and forcefully argued, Imperialism in the Twenty-First Century is a major contribution to the theorization and critique of global capitalism.