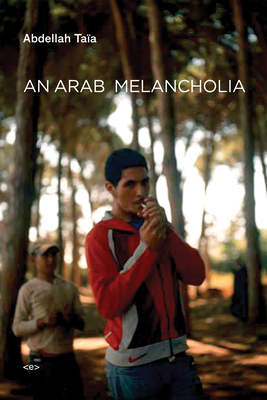 An autobiographical portrait of a gay Arab man, living between cultures, seeking an identity through love and writing.

I had to rediscover who I was. And that's why I left the apartment.... And there I was, right in the heart of the Arab world, a world that never tired of making the same mistakes over and over.... I had no more leniency when it came to the Arab world... None for the Arabs and none for myself. I suddenly saw things with merciless lucidity....
—An Arab Melancholia

Salé, near Rabat. The mid 1980s. A lower-class teenager is running until he's out of breath. He's running after his dream, his dream to become a movie director. He's running after the Egyptian movie star, Souad Hosni, who's out there somewhere, miles away from this neighborhood—which is a place the teenager both loves and hates, the home at which he is not at home, an environment that will only allow him his identity through the cultural lens of shame and silence. Running is the only way he can stand up to the violence that is his Morocco.

Irresistibly charming, angry, and wry, this autobiographical novel traces the emergence of Abdellah Taïa's identity as an openly gay Arab man living between cultures. The book spans twenty years, moving from Salé, to Paris, to Cairo. Part incantation, part polemic, and part love letter, this extraordinary novel creates a new world where the self is effaced by desire and love, and writing is always an act of discovery.

Abdellah Taïa (born in 1973) is the author of six novels, including Salvation Army and An Arab Melancholia, both published by Semiotext(e), and Infidels. His novel Le jour du roi, about the death of Morocco's King Hassan II, won the 2010 Prix de Flore. He also directed and wrote the screenplay for the 2013 film adaptation of Salvation Army.

Taia writes from within a distinctly different Arab culture in this passionate novel about two worlds intersecting.—Pridesource: Between the Lines—

There is light and space in his prose. And despair. At times, he uses the ellipsis suggestively…bringing out the apertures within and between words and thoughts, eliciting the unbridgeable gap between individuals. That is where desire seems to lie, and where belonging−and melancholia−is to be found in his writing.

Melancholia offers a view into the life of a man still very much in the making, a man still searching for love and answers. At one point, he wonders, 'How are you supposed to go on living when you're totally entangled in the sad, bitter, exciting memory of someone who didn't love you back?' It is a question that cuts across gender, sexual orientation, culture, and time-and stumps anyone unfortunate enough to find himself in its path.

Taia writes from within a distinctly different Arab culture in this passionate novel about two worlds intersecting.

This is honest writing from a marginalized position. It leaves with its readers an insistence that through everything there is always something else that follows. It's neither a hesitant optimism nor a beaten-down acceptance.... It's something else, something more human. The weight of the world cannot be taken on as the Sisyphean boulder, but rather we have to just forget about the world and make sure we're moving forward.

This slim autobiographical novel by an openly gay man who lives between cultures in Egypt and France is the kind of wry, reflective narrative prose that feels like poetry. Beautiful.