The Moon and the Bonfires (Paperback) 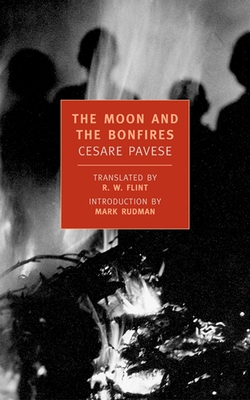 Pavese is my favorite Italian writer and this is his best novel. "A town means not being alone, knowing that in the people, the trees, the soil, there is something of yourself, that even when you're not there it stays and waits for you. But it isn't easy to live there and not be restless."

The nameless narrator of The Moon and the Bonfires, Cesare Pavese's last and greatest novel, returns to Italy from California after the Second World War. He has done well in America, but success hasn't taken the edge off his memories of childhood, when he was an orphan living at the mercy of a bitterly poor farmer. He wants to learn what happened in his native village over the long, terrible years of Fascism; perhaps, he even thinks, he will settle down. And yet as he uncovers a secret and savage history from the war—a tale of betrayal and reprisal, sex and death—he finds that the past still haunts the present. The Moon and the Bonfires is a novel of intense lyricism and tragic import, a masterpiece of twentieth-century literature that has been unavailable to American readers for close to fifty years. Here it appears in a vigorous new English version by R. W. Flint, whose earlier translations of Pavese's fiction were acclaimed by Leslie Fiedler as "absolutely lucid and completely incantatory."

Cesare Pavese (1908–1950) was born on his family’s vacation farm in the country outside of Turin in northern Italy. He graduated from the University of Turin, where he wrote a thesis on Walt Whitman, beginning a continuing engagement with English-language literature that was to lead to his influential translations of Moby-Dick, A Portrait of the Artist as a Young Man, Three Lives, and Moll Flanders, among other works. Briefly exiled by the Fascist regime to Calabria in 1935, Pavese returned to Turin to work for the new publishing house of Giulio Einaudi, where he eventually became the editorial director. In 1936 he published a book of poems, Lavorare stanca (Hard Labor), and then turned to writing novels and short stories. Pavese won the Strega Prize for fiction, Italy’s most prestigious award, for The Moon and the Bonfires in 1950. Later the same year, after a brief affair with an American actress, he committed suicide. Pavese’s posthumous publications include his celebrated diaries, essays on American literature, and a second collection of poems, entitled Verrà la morte e avrà i tuoi occhi (Death Will Come and Will Have Your Eyes).

Mark Rudman is the author of seven books of poetry and three books of prose. His poetic trilogy The Millennium Hotel,Provoked in Venice, and Rider received the National Book Critics Circle Award. The Couple is his most recent collection of poems.

R.W. Flint translated, edited, and introduced The Selected Works of Cesare Pavese in 1968 and Marinetti: Selected Writings in 1971. He has contributed interviews, essays, translations, and reviews on Italian writers to various journals includingParnassus, Canto, and The Italian Quarterly. He lives in Cambridge, Massachusetts.

“Pavese’s real ambition in this work did not reside simply in the creation of a successful novel: everything in the book converges in one single direction, images, and analogies bear down on one obsessive concern: human sacrifices.” —Italo Calvino, Why Read the Classics?

"Pavese’s nine short novels make up the most dense, dramatic, and homogeneous narrative cycle of modern Italy, and also…the richest in representing social ambiances, the human comedy, the chronicle of a society. But above all they are works of an extraordinary depth where one never stops finding new levels, new meanings." —Italo Calvino

"Cesare Pavese’s cool, contemplative voice was the most important among postwar Italian writers. He created a fresh narrative vernacular not only responsive to modern urban life but also to the traces in our time of the archaic past." —W. S. DiPiero

"Pavese made an attempt heroic and successful, to encompass national and social concerns. His novels about Italy in the later stages of the Second World War formed a ‘historical cycle of my own times’…..Among the [Italian neo-realist] novelists, Cesare Pavese had…the greatest mastery." —The New York Review of Books

"Now there can be no excuse for not reading Pavese, one of the few essential novelists of the mid-twentieth century. The new translations and the introduction by R.W. Flint are admirable." —Susan Sontag

"A control of prose rhythms that makes [Pavese’s] language at once absolutely lucid and completely incantatory." —Leslie Fielder

"There is something about [Pavese]—and the translation does not lose it—that is insinuating, haunting and lyrically pervasive." –The New York Times Book Review

“…one of the word's great creative depressives. The Moon and the Bonfires [is] his masterpiece on the aftermath of the partisan war in the hills around Turin.”- The Daily Telegraph