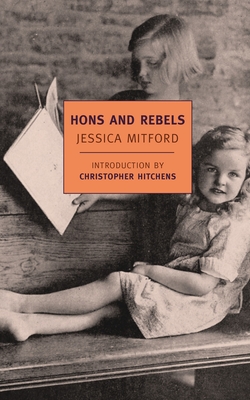 Jessica Mitford, the great muckraking journalist, was part of a legendary English aristocratic family. Her sisters included Nancy, doyenne of the 1920s London smart set and a noted novelist and biographer; Diana, wife to the English fascist chief Sir Oswald Mosley; Unity, who fell head over in heels in love with Hitler; and Deborah, later the Duchess of Devonshire. Jessica swung left and moved to America, where she took part in the civil rights movement and wrote her classic exposé of the undertaking business, The American Way of Death.

Hons and Rebels is the hugely entertaining tale of Mitford's upbringing, which was, as she dryly remarks, “not exactly conventional. . . Debo spent silent hours in the chicken house learning to do an exact imitation of the look of pained concentration that comes over a hen's face when it is laying an egg. . . . Unity and I made up a complete language called Boudledidge, unintelligible to any but ourselves, in which we translated various dirty songs (for safe singing in front of the grown-ups).” But Mitford found her family's world as smothering as it was singular and, determined to escape it, she eloped with Esmond Romilly, Churchill's nephew, to go fight in the Spanish Civil War. The ensuing scandal, in which a British destroyer was dispatched to recover the two truants, inspires some of Mitford's funniest, and most pointed, pages.
A family portrait, a tale of youthful folly and high-spirited adventure, a study in social history, a love story, Hons and Rebels is a delightful contribution to the autobiographer's art.

Jessica Mitford (1917–1996) was the daughter of Lord and Lady Redesdale, and she and her five sisters and one brother grew up in isolation on their parents’ Cotswold estate. Rebelling against her family’s hidebound conservatism, Mitford became an outspoken socialist and, with her second cousin and husband-to-be Esmond Romilly, ran away to fight against Franco in the Spanish Civil War. Romilly was killed in World War II, and Mitford moved to America, where she married the lawyer and political activist Robert Treuhaft. A brilliant muckraking journalist, Mitford was the author of, among other works, a memoir of her youth, Hons and Rebels; a study of the funeral industry, The American Way of Death; and Kind and Usual Punishment: The Prison Business. She died at the age of seventy-eight while working on a follow-up to The American Way of Death, for which, with characteristic humor, she proposed the title “Death Warmed Over.”

Christopher Hitchens (1949–2011) was a British-American journalist and social critic. Known for his confrontational style and contrarian views on a range of social issues, Hitchens was a frequent contributor to The Nation, The Atlantic, The Times Literary Supplement and Vanity Fair. Hitchens recounts his struggle with esophageal cancer in Mortality, which was published in 2012.

"More than an extremely amusing autobiography…she has evoked a whole generation. Her book is full of the music of time."
— Sunday Times

"Stunning. Reads like extravagantly mannered fiction, except that it is all fabulously true…Miss Mitford is at once touching and wildly funny, and there is not one of her highly coloured characters that is not violently alive and uncomfortably kicking."
— Tatler

"…the story of Jessica Mitford’s struggles makes tumultous and rewarding reading, and I recommend it heartily."
— Elizabeth Janeway, The New York Times

"[Mitford] has a most unusual talent for recapturing the past….There is a feeling of immediacy, as if it were all being written on the spot, at the time, by the teen-ager it was happening to. It is a fascinating book."
— New York Herald Tribune

"The admitted 'rich vein of lunacy' in the Mitford family apparently has done nothing to dim the brilliance of its members among whom Jessica must be included. Although there’s a strong undercurrent of seriousness throughout the book, it’s submerged under downright hilariousness, crackling brash humor and enchanting turns-of-the-phrase."
— San Francisco Chronicle

"Jessica Mitford (the fifth of the Mitford daughters) has brought a whole generation back to life in her autobiography….She tells the whole story of her rebellion…with engaging frankness and a spirited, often humorous, enthusiasm." — Richard McLaughlin, Springfield Republican

"Jessica tells her tale with girlish gush, brilliantly preserved a generation after the events…"
— Time