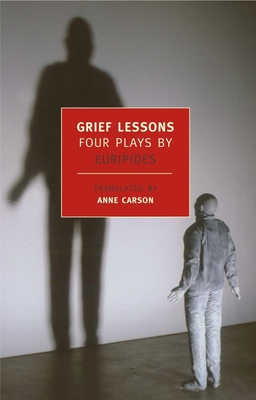 Euripides, the last of the three great tragedians of ancient Athens, reached the height of his renown during the disastrous Peloponnesian War, when democratic Athens was brought down by its own outsized ambitions. “Euripides,” the classicist Bernard Knox has written, “was born never to live in peace with himself and to prevent the rest of mankind from doing so.” His plays were shockers: he unmasked heroes, revealing them as foolish and savage, and he wrote about the powerless–women and children, slaves and barbarians–for whom tragedy was not so much exceptional as unending. Euripides’ plays rarely won first prize in the great democratic competitions of ancient Athens, but their combustible mixture of realism and extremism fascinated audiences throughout the Greek world. In the last days of the Peloponnesian War, Athenian prisoners held captive in far-off Sicily were said to have won their freedom by reciting snatches of Euripides’ latest tragedies.

Four of those tragedies are presented here in new translations by the contemporary poet and classicist Anne Carson. They are Herakles, in which the hero swaggers home to destroy his own family; Hekabe, set after the Trojan War, in which Hektor’s widow takes vengeance on her Greek captors; Hippolytos, about love and the horror of love; and the strange tragic-comedy fable Alkestis, which tells of a husband who arranges for his wife to die in his place. The volume also contains brief introductions by Carson to each of the plays along with two remarkable framing essays: “Tragedy: A Curious Art Form” and “Why I Wrote Two Plays About Phaidra.”

Euripides (c. 485—406 BCE) wrote ninety-two plays, of which eighteen survive–more than twice as many as survive from any other Greek tragedian. They include Medea, Andromache, Cyclops, Electra, The Trojan Women, Helen, The Phoenician Women, Orestes, and The Bacchae.

Anne Carson was twice a finalist for the National Book Critics Circle Award; was honored with the 1996 Lannan Award and the 1997 Pushcart Prize, both for poetry; and was named a MacArthur Fellow in 2000. In 2001 she received the T. S. Eliot Prize for Poetry (the first woman to do so), the Griffin Poetry Prize, and the Los Angeles Times Book Prize. She currently teaches at the University of Michigan.

"The amazing poet Anne Carson offers a new translation of four plays by Euripides, each of which unfurls in searing, plainspoken English. Her essays and introductions are priceless." -Time Out NY

"In Grief Lessons, the contemporary poet and classicist Anne Carson's spare and beautiful new translation of four of Euripides' lesser known tragedies, we have a kind of primer on the intrinsic dangers of blind devotion to ideology." -The New Yorker

"An eclectic selection that provides an excellent introduction to Euripides's range. Ms. Carson's Euripides is bleak, moving, and provocative, offering a painful reminder of the resonance of these ancient plays with our own times." -The New York Sun

"Grief Lessons...reminds us that the difference between competent and inspired translation is more than a matter of even bravura technical competence. It involves a kind of discreet union between writer and translator, a certain convergence of aesthetic impulse and intellectual inclination. The issue of such a union can take a reader's breath away because it just seems so right--a work that stands firmly on its own but is somehow contented to be the sum of its parts. Carson's is, in other words, an altogether worthy heir...It's a reasonable and reasonably provocative contemporary reading." -The Los Angeles Times

"Writing with a pitch and heat that gets to the heart of the unforgiving classical world, Carson..is nothing less than brilliant--unfalteringly sharp in diction, audacious and judicious in taking liberties...Worth the price of admission alone is Carson's blistering essay afterword, written in Euripides's voice...This amazing book gets very close to the playwright's enigmatic answers." -Publishers Weekly*