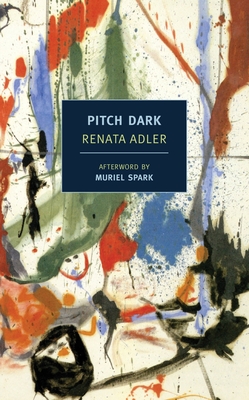 A strange, thrilling novel about desperate love, paranoia, and heartbreak by one of America's most singular writers.

“What’s new. What else. What next. What’s happened here.”

Pitch Dark is a book about love. Kate Ennis is poised at a critical moment in an affair with a married man. The complications and contradictions pursue her from a house in rural Connecticut to a brownstone apartment in New York City, to a small island off the coast of Washington, to a pitch black night in backcountry Ireland.

Composed in the style of Renata Adler’s celebrated novel Speedboat and displaying her keen journalist’s eye and mastery of language, both simple and sublime, Pitch Dark is a bold and astonishing work of art.

Renata Adler was born in Milan and raised in Connecticut. She received a B.A. from Bryn Mawr, an M.A. from Harvard, a D.d’E.S. from the Sorbonne, a J.D. from Yale Law School, and an LL.D. (honorary) from Georgetown. Adler became a staff writer at The New Yorker in 1962 and, except for a year as the chief film critic of The New York Times, remained at The New Yorker for the next four decades. Her books include A Year in the Dark (1969); Toward a Radical Middle (1970); Reckless Disregard: Westmoreland v. CBS et al., Sharon v. Time (1986); Canaries in the Mineshaft (2001); Gone: The Last Days of The New Yorker (1999); Irreparable Harm: The U.S. Supreme Court and The Decision That Made George W. Bush President (2004); and the novels Speedboat (1976; winner of the Ernest Hemingway Award for Best First Novel) and Pitch Dark (1983).

Muriel Spark (1918–2006) was a Scottish novelist and poet. Among the best known of her twenty-two novels are The Prime of Miss Jean Brodie, The Girls of Slender Means, Memento Mori, and Loitering with Intent. In 1993 she was made Dame Commander of the Order of the British Empire.

“Two things hold Pitch Dark together and give it speed and magic. The first is Miss Adler’s gift for language and observation . . . and the second is her willingness to write candidly, even rawly, about emotions.” —Michiko Kakutani, The New York Times

“These novels are records of a penetrating intelligence, a skeptical intelligence (but, thank God, not a reflexively skeptical intelligence). They are novels that persuade you of their claims to truth, and ones in which any literate young person in publishing in New York can see a bit of her or himself […] It’s great to have these novels back in print, at long last.” —Meghan O’Rourke, The  New Yorker’s Page-Turner Blog

"Adler's novels concede the necessity of making fiction quicker, more terse, descriptively less elaborate than the traditional thing called a novel, not so much in deference to shrunken attention spans, but as the most plausible way of rendering the distracted, fragmentary quality of contemporary consciousness [...] They describe what it's like to be living now, during this span of time, in our particular country and our particular world. This is what the best novels have always done, and with any luck will continue to do." —Gary Indiana, Bookforum

"Pitch Dark, like Speedboat, exudes a certain openness, a vulnerability, even. Adler dispenses with the defined paths of traditional narrative, along with expectations of order and sequence, and instead pieces together a collage of consciousness." —Jennifer Szalai, The New York Times Book Review

“Renata Adler is brilliant, and her character Kate Ennis is lovable in her complete disinterest for making herself lovable. It’s perfect and prescient, a tremendously influential book.” —Chris Kraus, for Slate

“If you simply allow [Adler’s fragments] to settle in their own patterns, flashing light where they will, you’ll find Pitch Dark a bright kaleidoscope of a book.” —Anne Tyler