The One: The Life and Music of James Brown (Paperback) 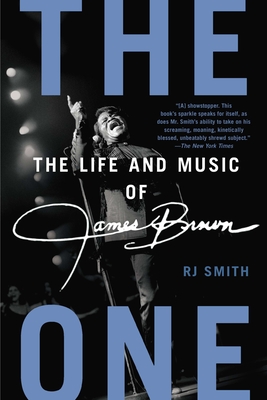 The definitive biography of James Brown, the Godfather of Soul, with fascinating findings on his life as a Civil Rights activist, an entrepreneur, and the most innovative musician of our time

Playing 350 shows a year at his peak, with more than forty Billboard hits, James Brown was a dazzling showman who transformed American music. His life offstage was just as vibrant, and until now no biographer has delivered a complete profile. The One draws on interviews with more than 100 people who knew Brown personally or played with him professionally. Using these sources, award-winning writer RJ Smith draws a portrait of a man whose twisted and amazing life helps us to understand the music he made.

The One delves deeply into the story of a man who was raised in abject-almost medieval-poverty in the segregated South but grew up to earn (and lose) several fortunes. Covering everything from Brown's unconventional childhood (his aunt ran a bordello), to his role in the Black Power movement, which used "Say It Loud (I'm Black and Proud)" as its anthem, to his high-profile friendships, to his complicated family life, Smith's meticulous research and sparkling prose blend biography with a cultural history of a pivotal era.

At the heart of The One is Brown's musical genius. He had crucial influence as an artist during at least three decades; he inspires pity, awe, and revulsion. As Smith traces the legend's reinvention of funk, soul, R&B, and pop, he gives this history a melody all its own.

RJ Smith has been a senior editor at Los Angeles magazine, a contributor to Blender, a columnist for The Village Voice, a staff writer for Spin, and has written for GQ, The New York Times Magazine, and Men’s Vogue. His first book, The Great Black Way, was a Los Angeles Times bestseller and recipient of a California Book Award. He lives in Los Angeles.

“The One is the first of its kind to represent James as the social and cultural force he was, not just for black Americans but for all of America—in fact, all of the world… I recommend reading [The One] for it will give you and unparalleled view into the man, the consummate entertainer, his music, and us as a nation.” — Al Sharpton, The New York Times Book Review

“I recommend reading [The One] for it will give you an unparalleled view into the man, the consummate entertainer, his music, and us as a nation.” —Reverand Al Sharpton, The New York Times Book Review

“A showstopper. This book’s sparkle speaks for itself, as does Mr. Smith’s ability to take on his screaming, moaning, kinetically blessed, unbeatably shrewd subject.” —Janet Maslin, The New York Times

“As illuminating as it is definitive.” —Rolling Stone, 4.5 stars

“RJ Smith may have come closer than anyone to understanding how James Brown became James Brown.” —The Christian Science Monitor

“The imperatives of biography are to record, to correct, and to carve out historical significance, and Smith’s lively account succeeds on all three fronts.” —Smithsonian

"The One: The Life and Music of James Brown crackles with the same kind of exuberant energy that explodes out of grooves of one of the Godfather of Soul's classic sides." -The Boston Globe

"This bio should be a cornerstone of soul-music-literature collections." -Booklist

"RJ Smith's authoritative, keenly intelligent bio of one of the most protean of American musical giants." -Philadelphia Inquirer

"Unflinching portrait of the conflicted and contradictory superstar...untangl[es] the psychological elements that came together to make James Brown, tracing his almost prescient ability to read audiences back to his days dancing for spare change from sailors and growing up in Georgia with a violent, unpredictable father.” -Associated Press

“Great telling of a really interesting man...captures the rhythm of the man” -On Point, WBUR