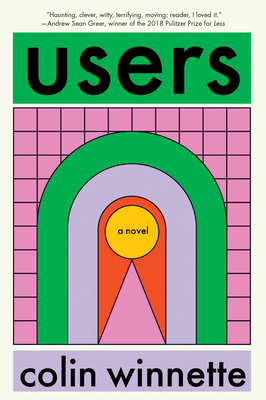 Marrying the philosophical absurdities of life, technology, start-up culture, and family, Users is for readers of Ling Ma, Dave Eggers’s The Circle, and viewers of the hit Apple TV+ original series Severance

Miles, a lead creative at a midsize virtual reality company known for its “original experiences,” has engineered a new product called The Ghost Lover. Wildly popular from the outset, the “game” is simple: a user’s simulated life is almost identical to their reality, except they’re haunted by the ghost of an ex-lover.

However, when a shift in the company's strategic vision puts The Ghost Lover at the center of a platform-wide controversy, Miles becomes the target of user outrage, and starts receiving a series of anonymous death threats. Typed notes sealed in envelopes with no postage or return address, these persistent threats push Miles into a paranoid panic, blurring his own sense of reality, catalyzing the collapse of his career, his marriage, and his relationship with his children.

The once-promising road to success becomes a narrow set of choices for Miles, who, in a last ditch effort to save his job, pitches his masterpiece, a revolutionary device code-named the Egg, which will transform the company. The consequences for Miles seal him inside the walls of his life as what was once anxiety explodes into devastating absoluteness.

In a world rife with the unchecked power and ambition of tech, Users investigates—with both humor and creeping dread—how interpersonal experiences and private decisions influence the hasty developments that have the power to permanently alter the landscape of human experience.

COLIN WINNETTE’s books include Coyote, Haints Stay, and The Job of the Wasp, which was an American Booksellers Association’s Indie Next Pick. Winnette’s writing has appeared in numerous publications, including Playboy, McSweeney’s, The Believer, and The Paris Review Daily. A former bookseller in Texas, Vermont, New York, and California, he is now a writer living in San Francisco.

"A disquieting cautionary tale for an age of virtual spaces." —Kirkus Reviews

"An engaging story of a virtual reality designer stuck in a rut . . . In Winnette’s hands, the dangerous blur between the virtual and reality provides both a warning and a thrill." —Publishers Weekly

“A surreal puzzle box and page-turner from which the reader may never recover, full of the unique absurdity, dark humor, and character insight that make Colin Winnette’s work such a joy.” —Jeff Vandermeer, New York Times bestselling author of the Southern Reach Trilogy and Hummingbird Salamander

“Users is the best kind of book: both thrillingly old-fashioned, and utterly, daringly timely. Winnette captures the anxiety and paranoia of the current age in a tale that will have you ripping through the pages. Haunting, clever, witty, terrifying, moving; reader, I loved it.” —Andrew Sean Greer, winner of the 2018 Pulitzer Prize for Less

"Users creeps upon the reader like the well-designed programs it describes, disguising itself as a tome about the future, virtual reality, the tech world, and what tantalizing dangers it wreaks. But what is truly frightening about this extraordinary book is the center of its futuristic shell—an unsettling look at marriage, parenting, and relationships that will lurk in the reader's mind long after the final page. Colin Winnette has written a delicious nightmare. Welcome to its open maw.” —Esmé Weijun Wang, author of The Collected Schizophrenias

"In gripping prose and disturbingly sharp focus, Colin Winnette presents us with a not-too-distant future where technology and selfhood have become completely entangled. Users shows how we can become addicted to our customizable versions of reality, both on and offline—and how tenuous the boundary between these two realms can be. I kept thinking about this novel long after I put it down." —Hernan Diaz, Pulitzer Prize Finalist, author of In the Distance and Trust