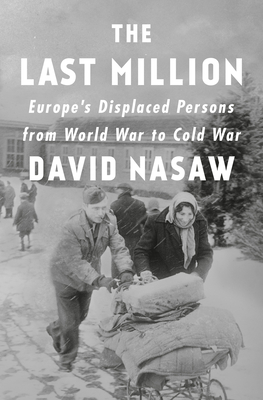 From bestselling author David Nasaw, a sweeping new history of the one million refugees left behind in Germany after WWII

In May 1945, German forces surrendered to the Allied powers, putting an end to World War II in Europe. But the aftershocks of global military conflict did not cease with the German capitulation. Millions of lost and homeless concentration camp survivors, POWs, slave laborers, political prisoners, and Nazi collaborators in flight from the Red Army overwhelmed Germany, a nation in ruins. British and American soldiers gathered the malnourished and desperate refugees and attempted to repatriate them. But after exhaustive efforts, there remained more than a million displaced persons left behind in Germany: Jews, Poles, Estonians, Latvians, Lithuanians, Ukrainians, and other Eastern Europeans who refused to go home or had no homes to return to. The Last Million would spend the next three to five years in displaced persons camps, temporary homelands in exile divided by nationality, with their own police forces, churches and synagogues, schools, newspapers, theaters, and infirmaries.

The international community could not agree on the fate of the Last Million, and after a year of debate and inaction, the International Refugee Organization was created to resettle them in lands suffering from postwar labor shortages. But no nations were willing to accept the 200,000 to 250,000 Jewish men, women, and children who remained trapped in Germany. In 1948, the United States, among the last countries to accept refugees for resettlement, finally passed a displaced persons bill. With Cold War fears supplanting memories of World War II atrocities, the bill granted the vast majority of visas to those who were reliably anti-Communist, including thousands of former Nazi collaborators and war criminals, while severely limiting the entry of Jews, who were suspected of being Communist sympathizers or agents because they had been recent residents of Soviet-dominated Poland. Only after the controversial partition of Palestine and Israel's declaration of independence were the remaining Jewish survivors able to leave their displaced persons camps in Germany.

A masterwork from acclaimed historian David Nasaw, The Last Million tells the gripping yet until now largely hidden story of postwar displacement and statelessness. By 1952, the Last Million were scattered around the world. As they crossed from their broken past into an unknowable future, they carried with them their wounds, their fears, their hope, and their secrets. Here for the first time, Nasaw illuminates their incredible history and, with profound contemporary resonance, shows us that it is our history as well.

David Nasaw is the author of The Patriarch, selected by the New York Times as one of the 10 Best Books of the Year and a 2013 Pulitzer Prize Finalist in Biography; Andrew Carnegie, a New York Times Notable Book of the Year, the recipient of the New-York Historical Society's American History Book Prize, and a 2007 Pulitzer Prize Finalist in Biography; and The Chief, which was awarded the Bancroft Prize for History and the J. Anthony Lukas Book Prize for Nonfiction. He is a past president of the Society of American Historians, and until 2019 he served as the Arthur M. Schlesinger, Jr. Professor of History at the CUNY Graduate Center.

“Nasaw, who has written well-regarded biographies of Andrew Carnegie and William Randolph Hearst, makes clear how much the Allied forces wished that those in the displaced remnant would simply go back to wherever it was they came from. (At one point, Fiorello La Guardia tried to talk the Poles into it.) Nasaw also captures the power of refusing to leave—the decision not to disperse. This isn’t to say that the goal of the Last Million was to stay in Germany forever. By not going through one door, they were trying to open others. For the Jews, the main options were, as Rosensaft laid them out, Palestine or some other place that had not been the recent site of genocidal murder, and the central conflict of ‘The Last Million’ is the fight, in the years following the war, over which it was going to be…A great contribution of Nasaw’s book is that it takes the cinematic moment in which American soldiers arrive and pronounce the nightmare over—‘Shalom Aleichem, Yidden, ihr zint frei,’ a Jewish chaplain from Brooklyn announced when he drove into Buchenwald—as a starting point rather than a closing scene.” —The New Yorker

“In The Last Million, Nasaw has done a real service in resurrecting this history . . . Anyone who thinks President Trump’s demonization of foreigners is an aberration should read this history.” —Washington Post

“David Nasaw devastatingly illustrates in 'The Last Million,' there was widespread reluctance among the victorious Allies to confront the true nature of the Holocaust…“The Last Million” describes in meticulously researched detail what happened to the [displaced persons] who felt—understandably enough—that they could not go back to the lands of their birth.” —Wall Street Journal

“One of the many virtues of ‘The Last Million’ is the author’s ability to make vivid sense of a bewildering moment. He clarifies without oversimplifying…Nasaw demonstrates throughout an especially supple sense of scale. Much of what makes the book so absorbing and ultimately wrenching is his capacity to maneuver with skill between the nitty-grittiest of diplomatic (and congressional, military, personal) details and the so-called Big Picture. In cinematic terms, he’s adroit at surveying a vast landscape with a soaring crane shot, then zooming in sharply for a close-up of a single face as it crumples... Nasaw takes pains to avoid facile comparisons between the history he recounts and the current global moment, with its — our — own seas of refugees. As his calmly passionate book makes plain, however, one would need to be willfully covering one’s eyes not to see how then bleeds into now.” —Adina Hoffman, The New York Times Book Review

“Insightful and eye-opening…Nasaw is a humane writer with a knowledge of his subject that is broad and deep.” —Jim Zarroli, NPR.org

“Based on an avalanche of research, sweeping, searching, and filled with intimate details, The Last Million tells the enduringly relevant and not well-known story of how political differences between the United States and the United Kingdom, Cold War calculations, ethnic and religious conflicts, and antisemitism trumped humanitarian considerations, ‘turning what should have been the primary mission upside down and victimizing those who had suffered the most.’” —Glenn C. Altschuler, The Jerusalem Post

“Tells of the last million who had been confined to refugee camps for five years....Through great research, Nasaw helps the reader understand the complexity of permanently relocating refugees to a new country.” —Seattle Times

“Nasaw, a two-time Pulitzer Prize finalist, has once again produced an extraordinarily well-researched book that is well worth reading.” —Christian Science Monitor

“Nasaw does a masterful job of bringing to light the lasting individual and global consequences of policies and attitudes surrounding the last million… A thought-provoking, highly recommended perspective on a complex and largely overlooked people and period of modern history.” —Library Journal, starred review

“[Nasaw] provides a characteristically thorough and impressively researched account of the roughly one million displaced persons who found themselves stranded in Germany after the end of the war…While delving into the weeds of political compromise and legislation, Nasaw never loses sight of the hopes and struggles of the people at the center…The Last Million showcases Nasaw’s deft handling of complexity—not only the number of global controversies that the Displaced Persons issue fed into, but the morally complex issues of collaboration.” —Shelf Awareness

“A richly detailed account of what happened to the one million Holocaust survivors, former slave laborers, and POWs who found themselves in Germany at the end of WWII . . . Nasaw skillfully and movingly relates a multilayered story with implications for contemporary refugee crises. This meticulously researched history is a must-read.” —Publishers Weekly, starred review