How Did You Get This Number (Hardcover) 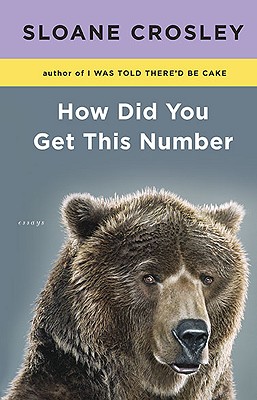 By Sloane Crosley
$25.95
Possibly out of print. Email or call to check availability and price.

From the author of the sensational bestseller "I Was Told There'd Be Cake" comes a new book of personal essays brimming with all the charm and wit that have earned Sloane Crosley widespread acclaim, award nominations, and an ever-growing cadre of loyal fans. In "Cake" readers were introduced to the foibles of Crosley's life in New York City-always teetering between the glamour of Manhattan parties, the indignity of entry-level work, and the special joy of suburban nostalgia-and to a literary voice that mixed Dorothy Parker with David Sedaris and became something all its own.
Crosley still lives and works in New York City, but she's no longer the newcomer for whom a trip beyond the Upper West Side is a big adventure. She can pack up her sensibility and takes us with her to Paris, to Portugal (having picked it by spinning a globe and putting down her finger, and finally falling in with a group of Portuguese clowns), and even to Alaska, where the "bear bells" on her fellow bridesmaids' ponytails seemed silly until a grizzly cub dramatically intrudes. Meanwhile, back in New York, where new apartments beckon and taxi rides go awry, her sense of the city has become more layered, her relationships with friends and family more complicated.
As always, Crosley's voice is fueled by the perfect witticism, buoyant optimism, flair for drama, and easy charm in the face of minor suffering or potential drudgery. But in "How Did You Get This Number" it has also become increasingly sophisticated, quicker and sharper to the point, more complex and lasting in the emotions it explores. And yet, Crosley remains the unfailingly hilarious young Everywoman, healthily equipped with intelligence and poise to fend off any potential mundanity in maturity.

"A worthy successor to Crosley's well-received debut, I Was Told There'd Be Cake...Most of the book is funny, some of it even laugh-out-loud, but her literary gifts go well beyond easy laughs. The humor flows naturally and subtly from characters and situations, as if these were real-life short stories. 'An Abbreviated Catalog of Tongues,' which initially seems to be a perfunctory pet essay, yet turns revelatory in a number of directions, addressing everything from sibling relationships to her parents' religion...Perhaps the finest essay is the final one, 'Off the Back of a Truck,' a clever, challenging piece from which the book takes its title. Initially about wanting what you can't afford, it transforms into an exploration of receiving what you want that you can't afford, through means that you're only partially willing to admit are pretty shady. Ultimately, though, it becomes a meditation on a romance that forces Crosley to come to terms with a truth she'd suspected and the lie she was living. It's the least humorous of the collection, but the most unflinchingly true. Confirmation of the promise shown in the author's bestselling debut."
-Kirkus, starred review "In her first collection of essays, I Was Told There'd Be Cake, Crosley revealed herself as the kind of writer with whom readers could be friends. You could exchange travel stories or compare descriptions of the odor of a NYC taxicab, and you could probably make her laugh, too. In Crosley's new book, she maintains her humor but inflects it wit ha sense of melancholy. In the manner of David Sedaris and Sarah Vowell, Crosley tells us about European vacation disasters, the inexhaustible nuances of life in New York, and playing the role of bridesmaid...in Alaska. Here even more personal and reflective than in her prior writing, Crosley saves the best for last with the beautifully layered 'Off the Back of a Truck,' which also contains the inspiration for the books title...Her ability to be at once so familiar and still surprise us is really showcased here. Smart, clever, and frank, Crosley's stories are as intimate, and embarrassingly eccentric, as the thoughts we keep to ourselves."
-Booklist, starred review "How sure footed and observant Sloane Crosley is. How perfectly, relentlessly funny. If you needed a bib while reading I Was Told There'd Be Cake, you might consider diapers for How Did You Get This Number."
-David Sedaris