The Akashic Experience: Science and the Cosmic Memory Field (Paperback) 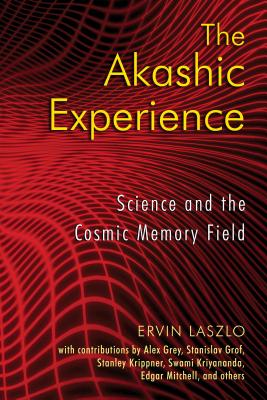 Knowing or feeling that we are all connected to each other and to the cosmos by more than our eyes and ears is not a new notion but one as old as humanity. Traditional indigenous societies were fully aware of nonmaterial connections and incorporated them into their daily life. The modern world, however, continues to dismiss and even deny these intangible links--taking as real only that which is physically manifest or proved “scientifically.” Consequently our mainstream culture is spiritually impoverished, and the world we live in has become disenchanted.

In The Akashic Experience, 20 leading authorities in fields such as psychiatry, physics, philosophy, anthropology, natural healing, near death experience, and spirituality offer firsthand accounts of interactions with a cosmic memory field that can transmit information to people without having to go through the senses. Their experiences with the Akashic field are now validated and supported by evidence from cutting-edge sciences that shows that there is a cosmic memory field that contains all information--past, present, and future. The increasing frequency and intensity of these Akashic experiences are an integral part of a large-scale spiritual resurgence and evolution of human consciousness that is under way today.

Ervin Laszlo is a philosopher and systems scientist. Twice nominated for the Nobel Peace Prize, he has published more than 75 books and over 400 articles and research papers. The subject of the one-hour PBS special Life of a Modern-Day Genius, Laszlo is the founder and president of the international think tank the Club of Budapest and of the prestigious Laszlo Institute of New Paradigm Research. The winner of the 2017 Luxembourg Peace Prize, he lives in Tuscany. In 2019, Ervin Laszlo was cited as one of the "100 Most Spiritually Influential Living People in the World" according to Watkins Mind Body Spirit magazine.

"The 20 accounts make fascinating reading, testifying to the fact that we are subtly yet effectively linked with each other, with nature, and with the cosmos. It inspires solidarity, love, empathy, and a sense of responsibility for each other and the environment. These are ineluctable elements of the mind-set we need to pull out of the global crisis that threatens our world and to create peace and sustainability on this perilously ravaged planet."
— SirReadaLot.org, March 2009

" . . . truly ground breaking in its attempt to give a measure of organization to the known and some sense of identity to the unknown. The human language, as it presently exists, simply does not have the eloquence to deal with the 'thought downloads' that we are dealing with in this sphere of experience."
— Zareen Khan, New Age Journal, May 2009

"Laszlo sees hope in the expanding horizons of scientific research and adds a note on his own experience of the infinite Akasha."
— Nexus New Times Magazine, Vol. 16, No. 4, June-July, 2009

"Laszlo has really delivered with this collection of varied experiences of the Akashic Field. It is reassuring to know that there are a lot of people out there willing to open their minds to new methods of thinking and perception, guiding us along the uncertain path we now walk, on the one side faith in the unknown, the uncertain; onthe other, solid scientific evidence. Up ahead the two shall meet and become one, and this reviewer hopes humanity one day comes to bathe in the shining light."
— Chard Currie, New Dawn, No. 116, Sep/Oct 2009

"Laszlo provides thought-provoking material as he continues to explore the nature of the universe and the field of awareness that connects us all."
— Alice R. Berntson, New Connexion, Sep/Oct 2009

“. . . Laszlo remains an intriguing and inspiring ambassador from the domain of Akashic advenutreland.”
— The Scientific & Medical Network, UK, December 2010

“The Akashic Experience is a collection of essays by twenty noted cultural and scientific leaders, each describing their experiences with what the book terms Akashic Field - a cosmic memory field that contains all information, past, present and future. . . The authors note the increasing frequency and intensity with which experiences with the Akashic Field are being reported, and which are forming part of the large-scale spiritual resurgence and evolution in human consciousness taking place today.”
— The Beacon, July 2011