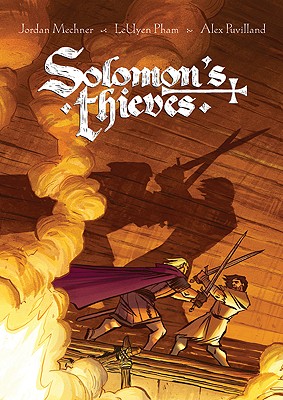 Life as a Templar Knight returning from the Crusades is dull bread, beans, and lots and lots of walking. But after Martin stumbles upon his lost love (now married to someone else), things begin to get more interesting very quickly. There's a vast conspiracy afoot to destroy the Templar Order and steal their treasure. Soon, Martin finds himself one of the only Templars out of prison and out for revenge

A swashbuckling story of betrayal, adventure, and an epic swindle, Solomon's Thieves is the first volume in a trilogy written by Jordan Mechner (the creator of the acclaimed Prince of Persia video games) and illustrated by LeUyen Pham and Alex Puvilland.

Jordan Mechner's videogames, including Prince of Persia, Karateka, and The Last Express, have received worldwide acclaim. Over 14 million Prince of Persia games have been sold around the world. He wrote the script for the Disney movie adaptation of Prince of Persia: The Sands of Time, produced by Jerry Bruckheimer and starring Jake Gyllenhaal. Mechner sold his first game, Karateka, while he was still an undergraduate at Yale. In 2003, Mechner wrote and directed the documentary Chavez Ravine: A Los Angeles Story, which was shortlisted for an Academy Award. He lives in Southern California.LeUyen Pham and Alex Puvilland are happily married in art. LeUyen has produced several acclaimed picture books for children, including her self-authored Big Sister, Little Sister. Alex has worked as a visual development artist for Dreamworks Feature Animation and on numerous films. They co-illustrated the First Second graphic novel Prince of Persia. They live in San Francisco with their son Leo.