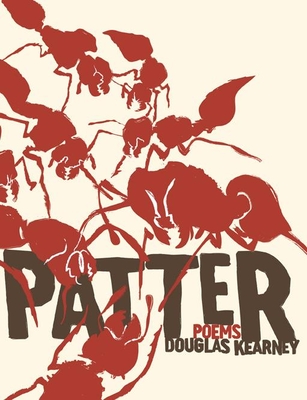 For a couple struggling with infertility, conception is a war against their bodies. Blood and death attend. But when the war is won, and life stares, hungry, in the parents’ faces, where does that violence, anxiety, and shame go? The poems in Patter re-imagine miscarriages as minstrel shows, magic tricks, and comic strips; set Darth Vader against Oedipus’s dad in competition for “Father of the Year;” and interrogate the poet’s family’s stint on reality TV. In this, his third collection, award-winning poet Douglas Kearney doggedly worries the line between love and hate, showing how it bleeds itself into “fatherhood.”

Poet/performer/librettist Douglas Kearney’s first full-length collection of poems, Fear, Some, was published in 2006 by Red Hen Press. His second, The Black Automaton (Fence Books, 2009), was Catherine Wagner’s selection for the National Poetry Series. It was also a finalist for the PEN Center USA Award in 2010. He has received a Whiting Writers’ Award, a Coat Hanger award, and fellowships at Idyllwild and Cave Canem. Raised in Altadena, CA, he lives with his family in California’s Santa Clarita Valley. He teaches at CalArts.

“Where, oh where would we be without the dynamic intelligence and feats of lyric daring that Douglas Kearney’s work has delivered to American poetry? The poems in Patter run back and forth through the realms of private interiority, popular culture, and the vast public arena of history, all the while re-inventing what the poetic line is capable of bearing and baring. Completely and un-ironically alive with genuine feeling, these are poems that are not afraid to say and show how we matter to one another.” —Tracy K. Smith

“Because bodies matter, name, beget and conceive, Douglas Kearney’s Patter exists within the stall, the break, the miscarriage in bodies bothered by history, blood and breath. What is it to father the inchoate and the ineffable that exists in the life of the black family? Kearney’s exquisite poems dissolve our sight, force us to speak aloud, and compel us to hunt and find within the illogic logic of our lives our lives. Patter is its own genius music—revolutionary, intimate and everyone’s.”
—Claudia Rankine

“In Patter, Douglas Kearney dissects several of the quiet and not so quiet terrors that stoke the worried furnace of our lives. These poems take a feverish look at fatherhood in particular and manhood in general. Because he does not accept the givens of what poetry can and cannot do, he breaks new ground, makes new lanes by which we might reach inwardly into our own private lunacies and outwardly into the grotesque confusions of the common world. Once under the spell of the sonic-semantic wizardry that pervades Kearney’s work, you not only know more, but what you’ve known before, you know differently.” —Tim Seibles